Activists accuse province of failing to acknowledge extent of problem 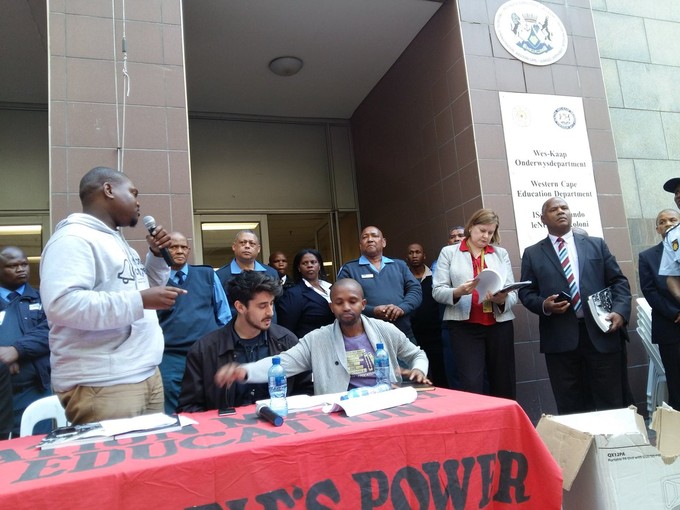 Broken toilets, shoddy infrastructure, widespread use of corporal punishment and a lack of student safety are some of the issues highlighted in the social audit of Western Cape Schools released by Equal Education (EE) yesterday afternoon.

The report draws together data from 244 schools, including 912 learner questionnaires, 220 administrator interviews and 229 site inspections. Its conclusions and methodology have been reviewed and approved by six education and research experts from local universities.

According to Nishal Robb, head of the Western Cape office of EE, the goal of the social audit is to force the Western Cape Education Department and Minister of Education Debbie Schafer to acknowledge that the problems in public schools are systemic, not isolated cases.

“I think we’ve got a big fight ahead of us. Our last meeting with the MEC actually ended in us walking out, because her office was absolutely condescending and arrogant and refusing to listen.”

Robb says compiling data was challenging because school officials worried about a backlash.

“The issue was the fear of principals, teachers and administrators - that they would be disciplined for speaking out,” he says. “We had to give assurances that names would be anonymous, because the point is not so much the individual cases but to show it’s a systemic problem.”

Dozens of learners joined EE for a press conference on Tuesday afternoon where copies of the report were handed over to Schafer.

“Ms. Debbie Schafer, a lot has to change in the Western Cape,” said Thulani Damane, a student at Intlanganiso Secondary School, before handing her a copy of the report.

Zfikile Mbewu, a student at Thembelihle Senior Secondary School, said the MEC’s office had been given the report months before and initially refused to respond, even after a protest at Schafer’s house on 29 June.

Paddy Attwell, spokesman for the Western Cape Education Department, said the department welcomes learners’ input but has already been working on many issues identified in the report.

“We want to see what they have to say. We’ll study the report carefully and look at their recommendations carefully,” he said.

“We welcome the involvement of learners in identifying these problems, we genuinely do. Our approach is a society approach - every stakeholder has a role to play.”

Attwell said the department continues to survey between 50 and 60 schools each year, with the aim of increasing the rate at which schools are surveyed. He said a 2014 survey found that 12% of schools in the Western Cape needed serious attention and that fixing infrastructure problems in those schools is an ongoing process.

“We work with a whole range of partners in dealing with these issues,” Attwell said.

Many learners either experience or witness violence on their way to and from school, especially at urban quintile 1 and 2 (poorer neighbourhood) schools, the report states.

Of those surveyed, three in five learners had witnessed a violent event, while one in ten had been personally assaulted. Sexual harassment and rape are identified by the report as significant and underreported problems.

Mbewu said girls become used to being touched without permission.

“Sexual harassment is something that is very common in our schools, but we just take it lightly because of how our minds are programmed, of what we are taught,” she said.

She said students like her, who have to walk a long way to school, are particularly vulnerable to violence and harassment.

“I live two hours away from the school. And I have to go to school, there’s no other thing I can do. But I have to walk to school, and that’s not safe for me,” she said.

While the WCED has a Safe Schools Call Centre that is meant to be available for students to report safety concerns and crime, the report found that the call centre is mostly used by administrators, with only 12 learners calling the hotline in two years.

“The fact that learners either don’t know about it or don’t think it will help them shows there’s a failure there,” Robb said.

“We have holes in fences, so anything that’s not allowed to be in school has easy access,” she said. “There are broken windows where there’s no difference between you and a person that’s outside on the street, because the classroom is as cold as the street.”

Corporal punishment, though illegal, is a common practice in public schools, the report states. Learners are beaten at 83% of schools, and beatings are a daily occurrence at 37% of schools.

Lunga Mzimkulu, a learner at Zola Business High School, said that while students are not beaten at his school, teachers can still be very insulting.

“Some learners can be traumatized by the way their teachers treat them. They’ll be harsh to us and say, ‘Oh, you are dumb,’” Mzimkulu said.

“Those are words we do not wish to hear from our teachers. We should be motivated, not be demotivated.”

Learners with disabilities have no access to separate toilet accommodations in three out of four schools, the report states. Often there are not enough working toilets for learners, with 57% of schools failing to meet the WCED minimum of one toilet per 35 learners.

According to the report, more than a quarter of learners reported there was no toilet paper in their bathrooms, while four in five reported no soap.

Sinoyolo Booi, a student at Usasazo Secondary School, said the lack of sanitary pads causes her to miss class. Mzimkulu said some girls use socks in place of pads.

Many schools in the Western Cape are constructed either partially or entirely of unsafe materials. The report found that only 41% of schools were built entirely from appropriate materials.

The report cites the Regulations Relating to Minimum Norms and Standards Regarding Public School Infrastructure, which requires that the 8% of schools made entirely of inappropriate materials be replaced by 29 November.

Loopholes that allow school infrastructure to remain unsafe are criticised in the report, such as the fact that the Norms and Standards policy does not account for schools made only partially of unsafe materials. The report states that the WCED does not accept responsibility for fixing unsafe schools built on private land.

Other common infrastructure problems include a lack of libraries, computers and recreational facilities. A fifth of learners reported that their school lacked a library altogether, while only 42% reported having access to a well-stocked library.

The majority of learners also reported having no access to a computer lab with internet.

One quarter of learners reported having no access to sports facilities.