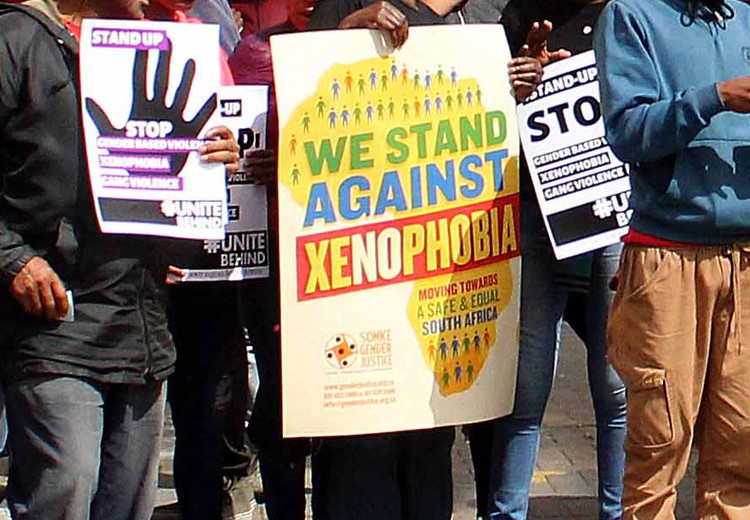 The authors argue that xenophobic acts of violence may in some cases fall foul of the Terrorism Act. Photo: Masixole Feni

By Avani Singh and Michael Power

“We, the people of South Africa, believe that South Africa belongs to all who live in it, united in our diversity.” This commitment in the preamble to the Constitution, stands in stark contrast to the spate of xenophobic attacks over recent weeks. We should call these attacks what they are: they are xenophobic and unconstitutional, and may rise to the level of possibly constituting domestic terrorist activity under the Protection of Constitutional Democracy Against Terrorist and Related Activities Act, 2004 (Protection Against Terrorism Act).

As South Africans, we should be ashamed of those who continue to perpetrate these unconscionable and unlawful acts of violence; ashamed of those who have scapegoated foreign nationals to explain the shortcomings in the creation of jobs and the provision of basic services; and ashamed of those in power who have consistently failed to take decisive and effective action to respond to these coordinated attacks.

I accept that the concern that non-citizens may become a financial burden on the country is a legitimate one and I accept that there are compelling reasons why social benefits should not be made available to all who are in South Africa irrespective of their immigration status. The exclusion of all non-citizens who are destitute, however, irrespective of their immigration status, fails to distinguish between those who have become part of our society and have made their homes in South Africa, and those who have not. It also fails to distinguish between those who are being supported by sponsors who arranged their immigration and those who acquired permanent residence status without having sponsors to whom they could turn in case of need.

Importantly, the Court went on to note the particular vulnerabilities that foreign nationals experience. Foreign nationals are in a minority in all countries, and typically have little political muscle. Further, the Court noted, citizenship is a personal attribute that is difficult to change; it is not generally within the control of the individual. And in many cases, acquiring citizenship involves unacceptably high costs and bureaucratic hurdles in engaging the immigration system.

In addition to the constitutional framework, South Africa is also bound by the African Charter on Human and Peoples’ Rights (African Charter). Article 24 of the African Charter provides that: “All peoples shall have the right to a general satisfactory environment favourable to their development”. South Africa cannot claim to meet this commitment in the face of the persistent xenophobic attacks, either overlooked or fuelled by our own politicians over the course of the last decade.

In response to the crisis, the African Commission of Human and Peoples’ Rights issued a statement condemning the xenophobic attacks in South Africa, and reminded South Africa of its obligations under the African Charter – including to ensure that all persons, including foreign nationals, enjoy the rights and freedoms guaranteed in the African Charter, without discrimination. It further called on the government of South Africa to ensure that security measures to protect foreign nationals are reinforced; for a commission of inquiry to be established to investigate the recent attacks; and for the government to take deliberate and urgent action to address the underlying social and economic conditions that ferment sentiments against foreign nations.

Notably, the statement also urged all persons, including politicians and community leaders, to refrain from statements or actions that stoke, incite or encourage anti-foreign sentiments and violence against foreign nationals.

These are important recommendations, and should be heeded – but they can go further. In our view, the current xenophobic attacks may further meet the definition of domestic terrorist activity.

In terms of the Protection Against Terrorism Act, “terrorist activity” is defined as, among others, “any act committed in or outside the Republic, which involves the systematic, repeated or arbitrary use of violence by any means or method” and “which is intended to intimidate, or to induce or cause feelings of insecurity within, the public, or a segment of the public, with regard to its security, including its economic security, or to induce, cause or spread feelings of terror, fear or panic in a civilian population”. The definition adds that this act must be “committed, directly or indirectly, in whole or in part, for the purpose of the advancement of an individual or collective political, religious, ideological or philosophical motive, objective, cause or undertaking”.

The South African Police Service (SAPS) and the National Prosecuting Authority (NPA) are best placed to determine whether these attacks may be defined as domestic terrorism. In making their determinations, both the SAPS and NPA should be cautious not to misuse such legislation to curb the legitimate exercise of fundamental rights. However, whether or not the current attacks constitute domestic terrorist activity should be contemplated in the current discourse – particularly if the violence persists in the absence of effective measures to address it – and should compel the relevant authorities to treat this crisis with the appropriate level of seriousness.

Much more needs to be done – urgently, decisively and transparently. The state is bound by both the Constitution and the African Charter to take positive action to give effect to the rights contained therein. Failure to do so requires those in positions of power to be held to account for their complicity. Equally, all people within South Africa are bound to act in accordance with the Constitution and we should strive to protect those whose human rights are being violated, whether they are citizens or foreign nationals. This includes the responsibility placed on our leaders to consider where their rhetoric and actions may lead.

While the state is entitled to manage the immigration process, this must be done in a lawful and constitutional manner. This should start with putting in place effective mechanisms; ensuring that determinations are made and communicated timeously; providing monitoring over its own processes; and facilitating appeals and reviews of decisions taken. This can go a long way towards a more equitable outcome. But the current state of lawlessness, marauding as vigilante justice, cannot be allowed to persist. This is simply not the constitutional dispensation to which South Africa is committed. We need to call out the violence for what it truly is. It is only once we acknowledge this that we can act decisively, redress and remedy the violence, and start to heal as a nation.

Avani Singh and Michael Power are attorneys and Directors at ALT Advisory. They write in their personal capacities.