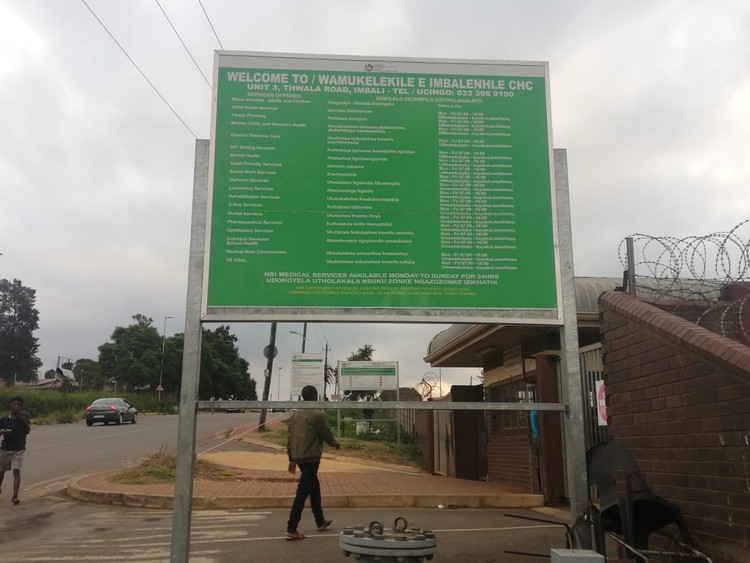 The IMbalenhle clinic in Imbali, Pietermaritzburg, was closed on Monday after employees were attacked at the weekend. Photo: Nompendulo Ngubane

Patients were turned away from IMbalenhle clinic in Pietermaritzburg on Monday as staff members were not working after some of the workers were attacked at the weekend.

KwaZulu-Natal Department of Health spokesperson Noluthando Nkosi said that on Sunday eight armed men had entered the clinic posing as patients and assaulted two staff members who had sustained minor injuries. The department had opened cases of assault at the local police station and had “made a decision to strengthen security for both the day and night shifts in a bid to protect its workers” said Nkosi.

In May residents blocked the road outside the clinic with burning tyres. They were complaining about not getting cleaning jobs at the clinic, which they said they had been promised. They want the contractor, Jackson’s Cleaning Services, to be dismissed.

A staff member said she came to work and left on Monday. She said, “It is a scary environment after the attacks. This is the second attack on the staff by local residents. We don’t know if the residents will come to the clinic again. I left the office because I was scared.”

“None of us is working until the matter is sorted,” she said.

Patients, including those who had come for regular pregnancy check-ups, and the elderly, were turned away.

Nonto Mduli from Imbali township, who had come for her grandson’s vaccination, said she hoped the situation would be resolved. “We understand residents have rights, but it should not affect us. I don’t have money for a private pharmacy for vaccinations,” said Mdluli.

GroundUp contacted Jackson’s Cleaning Services. We were told the owner was in Cape Town during the attack but the matter was being investigated.

Ward Councillor Xolani Ngongoma said he had done all he could, including meeting clinic management, but without success. He said the department was not helping resolve the job controversy.