Arcadia House: No solution in sight for families as demolition starts

“If we had anywhere else to go, we would gladly go” 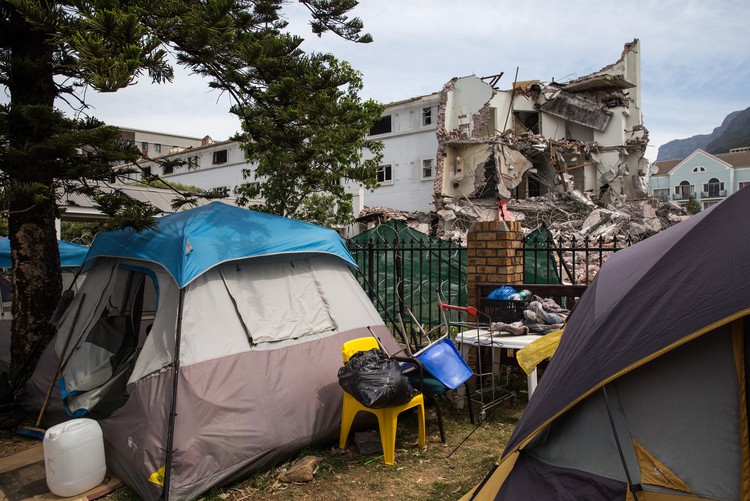 Occupiers of Arcadia Place old age home have been evicted and some have moved into tents on the lawns outside while the property is demolished. Photo: Ashraf Hendricks

Several families are still camping on the lawns outside Arcadia Place, an old age home in Observatory which is being demolished. The centre was occupied in September by a group of about 200 backyarders, homeless people and shackdwellers.

The property is owned by Cape Peninsula Organisation for the Aged (CPOA) and had been left vacant before the occupation around 17 September. A group of about 200 backyarders, homeless people and shack dwellers began to live in the building. The CPOA has said that the building needs to be demolished because it is unsafe and that a new welfare retirement home will be built in its place in the second quarter of next year.

The occupiers were evicted from the building over a month ago. The CPOA’s lawyers have written to the occupiers asking them to move 100 metres away for safety.

About ten tents and makeshift washing lines with clothes dangling from them have been erected on the lawn outside.

Lindelwa Vuza is living with her three children and two other family members in what looks like a four-person tent. Her 16-year old is in grade 10 and is currently writing exams. Vuza said it was difficult for the children to study. They share a solar powered lamp. But, she said, they had no plans to leave. “If we had anywhere else to go, we would gladly go”.

Spokesperson for the group Barbara Vuza said that they would continue to live on the lawn even once the building was gone. “Where else can we go?”.

She said they buy food with the little money they have and a nearby church sometimes cooks for them. She said that the nearby petrol station no longer allows them to collect water so they have to find other means. They are currently using the toilets at the nearby McDonalds and Pick ‘n Pay.