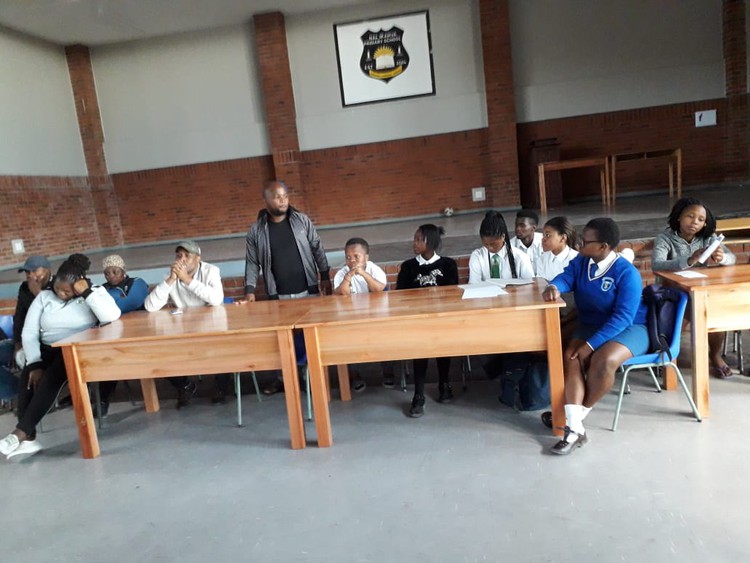 Community leaders and learners met at Nalikamva Primary School after the protests yesterday to discuss the situation. Photo: Vincent Lali

Angry learners from Fairdale High School disrupted learning in other high schools in Mfuleni on Tuesday, demanding that the Western Cape Education Department move them to a nearby school.

Magadla said the school principal had cautioned learners against participating in the protest at the assembly, but some learners had ignored him and joined the demonstration.

Qhama Mlonyeni, chair of the Learner Representative Council (LRC) at Fairdale High School, said the learners wanted to move into a new, prefab school in nearby Silversands and attend classes in the mornings. Moving into the new school would enable learners to spend more time in the classrooms and catch up with their school work. “We will engage in sport, enter school competitions and have school choirs,” she said.

LRC member Ntombenkosi Siyothula said: “Because we attend classes for a few hours, we are behind with our school work.” Siyothula said Fairdale High School learners are supposed to be busy with fourth term work, but they are still battling with third term one.

Mfuleni SANCO leader Zingisile Ndamase said the department had promised that the school would be ready by October.

“Student leaders have made a decision to shut down schools until the department opens their new school in Silversands. We as community leaders and parents fully support them,” said Ndamase.

Addressing the learners, Ndamase said: “Now that the protest has made an impact, we want you to go back to your classrooms.”

Spokesperson for the Western Cape Education Department, Bronagh Hammond said “disruption of schooling is totally unacceptable”. She said the new Fairdale High School was ready, but residents of Silversands were preventing Mfuleni learners using it. The department had asked councillors to convince Silversands residents to allow the learners to move into the school, she said.

But Pakamisa Keswa, speaking on behalf of Silversands residents, took issue with Hammond blaming his neighbourhood’s residents. “One of the biggest concerns about the high school is that learners of Silver Sands, Hindle Park Bardale Village, Highgate, Sunbird Park, Camelot, Wembly Park(areas in the vicinity that do not have their own high schools) are not going to be accommodated at this new school. Parents are currently forced to send their children to schools as far as Parow, Bellville, Soneike and so on,” he wrote. (See Keswa’s full letter below this article.)

Western Cape Police spokesperson Siyabulela Malo said the police had opened a case of public violence against the learners. “It has been reported that these learners were throwing stones at the passing vehicles and also at a police vehicle,” he said.