Protest against upgrade of informal settlement 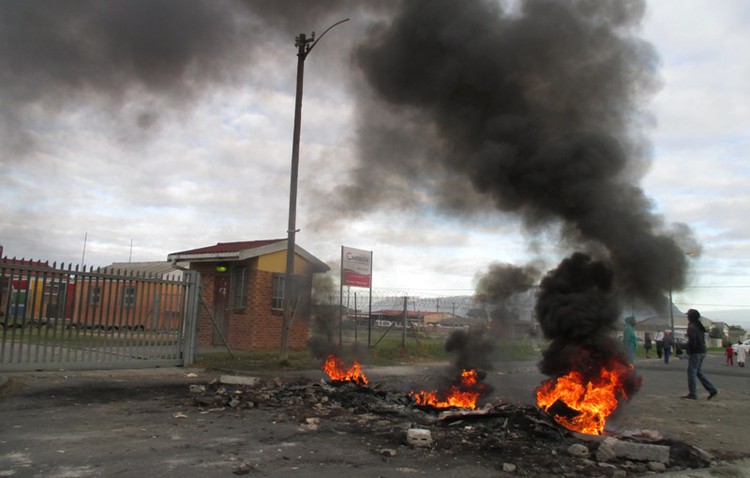 The Vukukhanye Primary School in Gugulethu was closed to staff and pupils this morning after angry residents barricaded it with burning tyres and debris.

A small group of residents who converged on the school in NY 102 said they were protesting against the upgrading of the nearby Tambo Square Informal Settlement.

They said the residents of the settlement didn’t deserve the upgrade and the land should rather be used for a children’s park, a communal building for the elderly, a creche and a satellite police station.

The protest, with growing flames and darkened smoke filling the sky, follows blockades of roads in February by the residents of Gugulethu’s Section Four over the same issue.

Residents told GroundUp that the original occupants of the area now known as Tambo Square had fled violence in KTC in the 1980s. But they had been moved into RDP houses at Tambo Village near Manenberg in 1998, and new families had moved onto the site.

The number had recently grown to 144 families, they said

Some of the residents of the informal settlement have relocated their shacks to make way for the development and trenches have already been dug for drainage.

Section Four community leader Joyce Ngakwe said residents were frustrated because the municipality had agreed to stop the project in February and negotiate with the Section Four residents but had not done so.

“We have exhausted all the relevant channels to consult with the authorities. I do not know what else we must now do,” said Ngakwe.

The City of Cape Town had not responded to GroundUp’s queries by the time of publication.

Ngakwe said Metro Police and Law Enforcement officers had been deployed to protect the site.

Zakhe Lujabe, 38, accused the municipality of “playing political games” and using “the apartheid government’s divide and rule policy with us” .

“Those people are from outside and it is not the original group we initially accommodated on the plot in the 1980s.”

Gugulethu Development Forum secretary Vincent Domingo said the forum had written to the City asking for the development to be suspended in order to avoid conflict between the two groups of residents.

While GroundUp was at the site today one heavy duty vehicle was leaving the area and development appeared to have been halted.

By the late afternoon residents had blocked NY78 and a police helicopter was circling the area.