Anger over 10,000-seater stadium for Observatory

“We want development that supports the area,” says resident 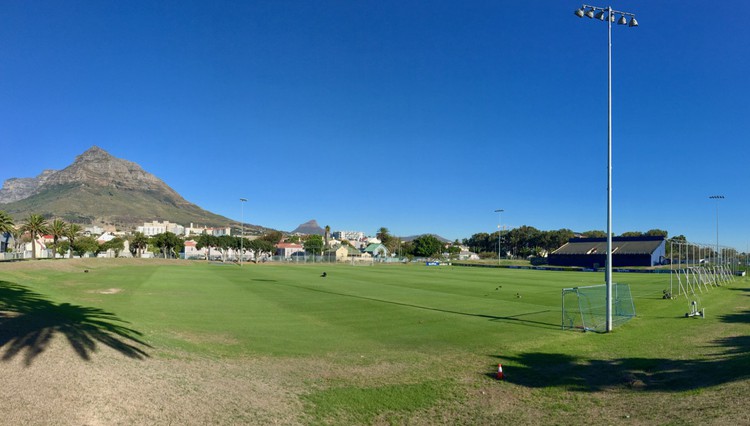 Cape Town City Football Club is currently using the Hartleyvale A field next to the hockey stadium in Observatory as its training ground. The club intends to build a 10,000-seater stadium here. Photo: Aidan Jones

Dozens of residents gathered at the Observatory Community Centre on Tuesday night to raise their concerns over plans by Cape Town City Football Club (CTC) to build a 10,000-seater stadium in the area.

“As a community we feel we have somehow been skipped,” said Tauriq Jenkins, chairperson of the Observatory Civic Association (OCA), which convened the meeting. He said that although the community is not against development, it wanted a say in what kind of developments are made.

Residents raised concerns about increased traffic congestion, the environmental impact, access to the park, and light and noise pollution in a residential area.

Three months ago the City of Cape Town granted CTC a lease for Hartleyvale Stadium grounds, at a rate of R8,500 per month, for two years and 11 months.

“The rental is less than the City is charging the OCA to run the parking lot behind the Spar [on the corner of Nuttall and Station Roads],” said Leslie London, an Observatory resident and the OCA committee member responsible for large developments.

“We don’t want to object to development, but what we want is appropriate development where it’s possible … and a 10,000-seater stadium in the middle of the park just does not work,” said Marc Turok, an Observatory resident involved in architecture and heritage, who is also vice-chair of the Two Rivers Urban Park Association (TRUPA).

Turok said development of the area was necessary but not a 10,000-seater stadium. “Heritage Western Cape has put a two-year protection on the park” as part of ongoing development plans with TRUPA, said Turok.

Dale Forbes, OCA head of arts, sports and culture, said he had met CTC owner John Comitis about the club’s intentions. Forbes said CTC would invest R200 million in the development and aimed to open the stadium by mid-2020. He said CTC was looking for anchor tenants, including a commercial chain, fast food outlet and coffee shops to operate “underneath the stadium” and “generate ongoing revenue”.

GroundUp asked CTC about the development plans and whether concerns raised at Tuesday night’s meeting had been taken into account, but CTC declined to comment.

“The football is in the foreground but the reality is that this is just business development,” said Observatory resident Katrin Bohlender.

Councillor Stuart Diamond, Mayco Member for Assets and Facilities Management, told GroundUp that although CTC had expressed an intention to build a 10,000-seater stadium at Hartleyvale, “no formal plans or application have been submitted [to the City]”.

“The City advertised [the lease] by placing adverts in the newspapers,” said Diamond. “Notices were sent to the immediate adjacent owners, ward councillor, sub-council chairperson and manager, as well as the relevant rate payer association. Comments and objections were considered before any lease rights were granted.”

A resident, who said his name was Howard, asked why the ward councillor, Patrick Chapple, was not present. “Where is he [Chapple] when we are surrounded on all sides by developers?” he asked.

Chapple informed GroundUp that he did not attend the meeting because of a potential conflict of interest.

Jenkins said the next step for the civic association would be to develop a community response and enter into discussions with the City. A feedback meeting is to be held on 24 April.