Organisation calls for government to answer to Human Rights Commission 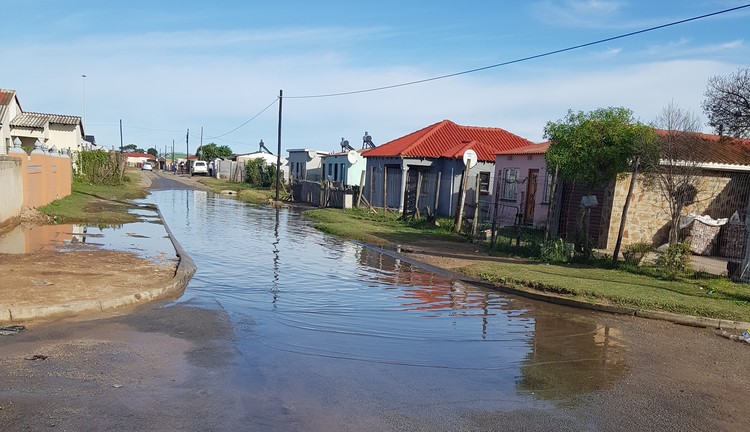 A leaking pipe has caused this stream in Motherwell, Gqeberha. Photos: Joseph Chirume

Nelson Mandela Bay is running out of water. Dam levels were at 13% of capacity on 10 May. The municipality projects that unless rain comes, the area will run out of water by the end of June.

Yet the Nelson Mandela Bay Municipality is struggling to contain leaks.

The photo above shows a flooded street in NU9, Motherwell.

Bongani Makhubelo lives in the area. He says the water comes from a burst pipe and flows down the entire street before it enters a drain. The stream that has been created is about two kilometres. This particular leak started on Sunday, but it’s not the first time this has happened.

“This is clean water and it is being wasted,” Makhubelo says.

The photo below shows flooding in NU8, Motherwell. The water is gushing out of a house. Outside the entrance to the house is a large puddle of water. We made several visits to try to speak to the owners but they have never been home.

A resident in the neighbourhood said this leak has been going for two months. 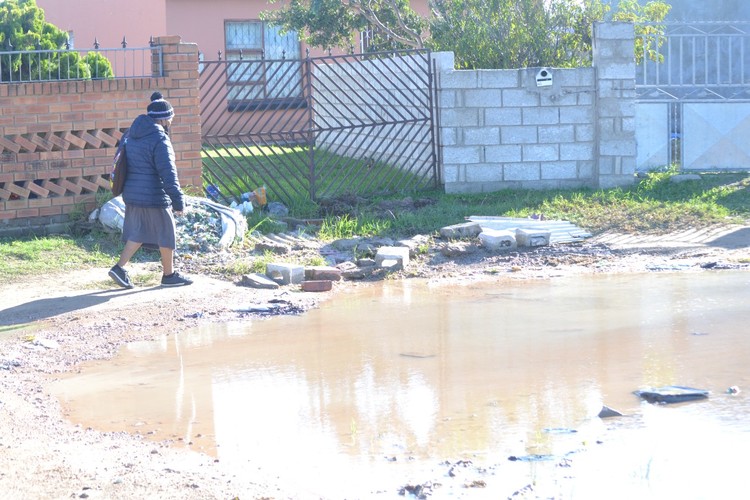 A woman navigates her way past a puddle of water caused by a leak.

Residents, fed up with the municipality, don’t bother reporting the leaks, because it takes so long to fix them or because there are many municipality workers in the area who should be aware of the leaks.

Municipality spokesperson Mthubanzi Mniki told GroundUp, that the municipality is increasing its capacity to reduce leaks by “bringing in several plumbers”.

“The municipality’s poor management, failing infrastructure, and increasing demand for consumption are the key factors for the rapid disintegration of our water system. In essence, we gave control of perhaps our most valuable resource for survival, our water, to a gang of inept criminals known as the Nelson Mandela Bay Municipality. Now we, as residents of Nelson Mandela Bay, must face this acute situation in our water supply without a concrete understanding for how to resolve it,” the organisation stated.

It has called for the government to answer to the Human Rights Commission.

Mniki said that the municipality is “in the process of” increasing supply of water tankers, standalone pipes and water tanks to communities.

A statement by the municipality says that residents are consuming about 50 million litres a day too much. “It is projected that should the current demand for portable water continue at 280 million litres a day, 40% of the city will have no water by the end of June 2022.”