Police arrest one of the ANCYL group 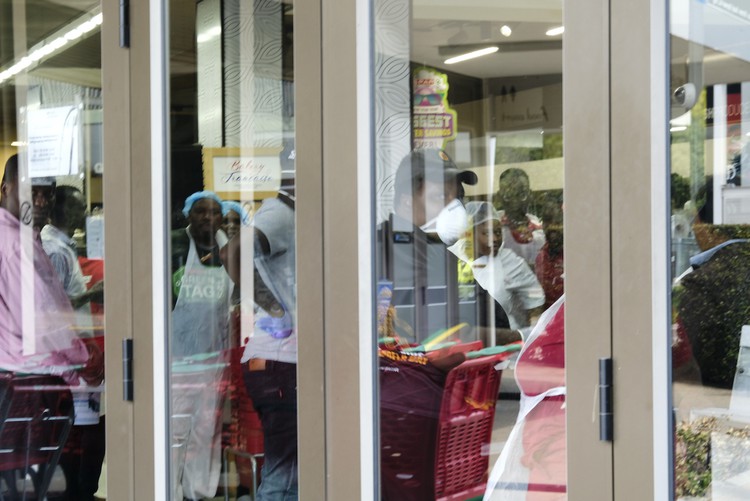 Doors were closed at Waterkloof Spar in Pretoria after members of the ANC Youth League interrupted operations. Photo: Elna Schütz

Police arrested a man on Wednesday after a small group belonging to the ANC Youth League demanded that a Spar supermarket in Waterkloof, Pretoria, close its doors.

The group confronted store management, saying that they were not complying with necessary protocol around protective measures for staff, such as gloves, masks, and sanitiser.

A manager showed the group some personal protective equipment (PPE) and explained that they were trying to obtain more. After continued confrontation, the store closed and turned away customers for a few hours while police officers, managers, and the group negotiated.

The South African Police Service’s Brigadier Vishnu Naidoo said the group were warned but after one of them did not comply, officers “had no choice but to detain the suspect for failure to confine oneself to one’s residence, and for interfering with a police officer in the execution of their duties to prevent the spread of Covid-19”.

After the arrest, about half of the 30 workers who had gathered in the store, left. A manager made it clear that this might be counted as an unprotected strike.

The ANCYL’s Kissmore Rasilingwani told GroundUp: “Protocol must be followed for the health of the workers”. He said that shutting down the store was “the only way”.

“He [the Spar’s manager] tells us that he is following this protocol but the workers are not seeing that,” said Rasilingwani. He was concerned that workers would infect others in their households should they contract the virus.

The national lockdown regulations state that retail stores must ensure that “all directions in respect of the hygienic conditions and the exposure of persons to Covid-19 are adhered to”. However, providing PPE such as masks for staff is not explicitly a rule.

Desmond Borrageiro, the managing director of Spar North Rand, said that the store’s owner “has ensured that his staff have the appropriate protective clothing and sanitation tools in line with our Spar policy and legislative guidelines.” He said the retail chain supports the position that masks and gloves should primarily be for healthcare workers and those who have tested positive for Covid-19.

The youth league action appears to be part of a wider, more general move against Spar stores in the capital. Rasilingwani said they had plans to shut down more locations after the lockdown ends.

The arrested man will appear in court on 14 May.