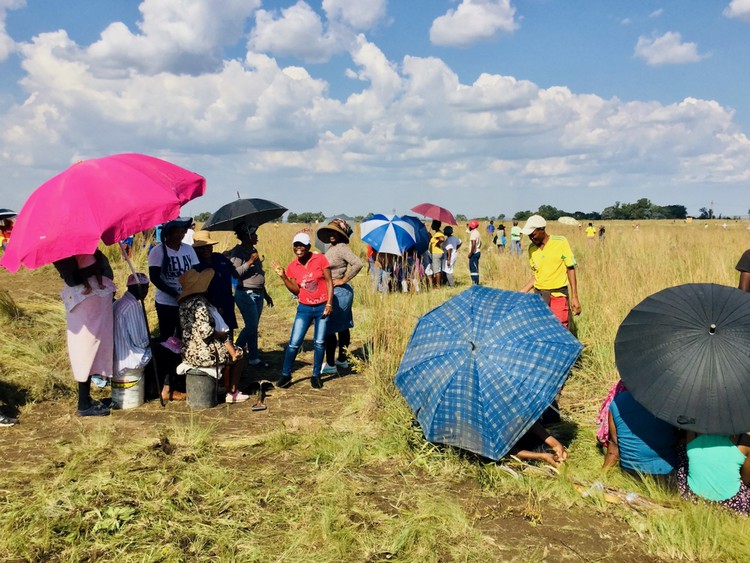 Hundreds of people have joined a land occupation in in Marikana, Kwathema, south-west of Springs. Photo: Kimberly Mutandiro

Holding an umbrella to protect herself from the hot sun, Mxolosi Mthetwa at last sits down next to her shovel and sips a cooldrink. She has been clearing a small plot of land to build a shack. She woke up early in the morning to register her name and to have a site allocated to her in Marikana, Kwathema, south-west of Springs.

The people who allocated land to her and many others have vowed to protect them.

“I am very happy today because finally my children and l have a piece of land of our own,” she said. Mthetwa was a backyarder for 20 years. Her rent was R400 a month.

“My God and ancestors have answered my prayers. Month end when l get my pension I will buy material to build a shack,” she said.

Mthetwa said she bought a piece of land for R1,500 seven years ago at another occupation, but the Red Ants destroyed her shack.

Sipho Zwane, a resident of Marikana and chairperson of the community committee in charge of land allocations, claims to be non-partisan. Together with members of the South African Civil Organisation (SANCO) he runs the occupation.

“I was angered by the fact that members of the ANC have been selling land to people for as much as R15,000 a stand. When we go to the Councillor [Tshepiso Petros Mondlane (ANC)] to report, he turns us away,” said Zwane.

“This is not a politically motivated initiative; l am not a member of any political party, neither are any of my committee members. We are just a group of angry residents who have put our feet down to stop ANC corruption.” Zwane said he formed a committee together with other angry residents to start allocating land to individuals.

Mahlatsi Sithole, a member of the committee, said, “A member of ANC sold me land for R15,000 three years ago. I spent all the money which l inherited after my father’s death to ensure that my children and l had a place to live.”

Sithole said the man she bought it from continued to extort money from her, threatening to take the land back.

“l am a single mother of two and it made it easier for the man to abuse me. He would threaten me, [forcing me] to buy him beer or else … On top of the money l initially paid, l can say l gave him up to R1,200 ‘cold drink money’ from the money I earned selling chicken feet,” she said.

Sithole said she was saved when community members intervened.

Touring the site with Zwane, GroundUp saw him being hugged and applauded by the land occupiers.

Sibongile Hlope said, “If it wasn’t for Sipho [Zwane], the people of Marikana would suffer. Land in this area is sold. We thank him for taking a stand against corruption.”

Zwane said R1 is charged per stand. “For us to make copies of the paperwork we are using to register people for land. All a person has to do is give us a copy of their ID, R1 and we register them,” he explained.

Ward Councillor Tshepiso Petros Mondlane (ANC) said, “Those people are occupying the land illegally. They heard that a housing project is earmarked for the area and they want to benefit unfairly. Steps will be taken to remove those people because by invading the land they are standing in the way of the land being developed. I am told that an EFF (Economic Freedom Fighters party) man is in charge of giving out the land but l am still investigating to put facts together.”

He said he was never involved in selling plots. “It came to my attention that certain ANC members are selling land and using my name. I am not involved in any way. We are investigating to get to the bottom of the issue.”

Zwane vowed that he would die protecting the people from being taken off the land. He said he was not with the EFF.