Amanzimtoti community without water for weeks

Ethekwini Municipality has promised to send water trucks to the community 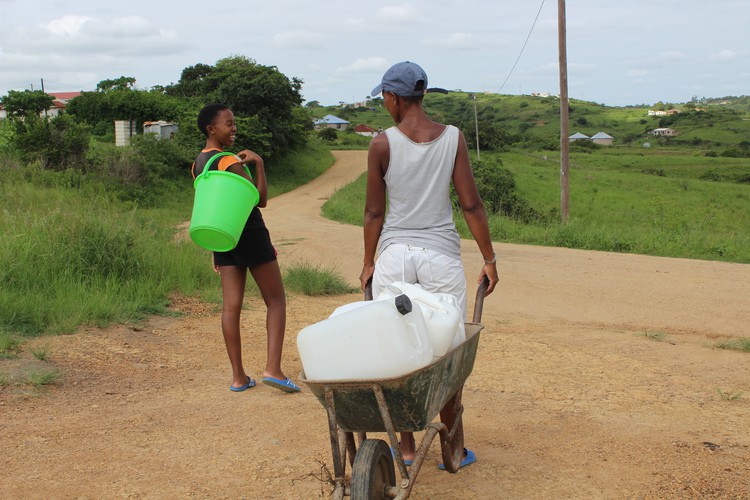 Khumbuzile Nyembe and her daughter use a wheelbarrow to carry containers to fetch water at least two kilometres away. Photo: Nomfundo Xolo

Residents of a rural community in Amanzimtoti, south of Durban, have gone weeks without clean drinking water.

Egudwini community members say the taps in the area ran dry years ago. They have been relying on the eThekwini Municipality’s water truck until November when it stopped visiting the community.

At least four water tanks were seen in the community and another one a few kilometres away. These are meant to be filled by the water truck but three are no longer functional, residents explain.

“We don’t even know when the truck is expected to come around. We have made numerous calls to the municipality but it has been a no show all of December and January,” says resident, Khumbuzile Nyembe.

Nyembe says the area has been plagued with regular disruptions to its water supply for years. “The water truck that is meant to at least ease the situation, but it goes for weeks without coming. When it does show up it only goes to certain homes,” she says.

Nyembe recently moved to Egudwini where she could have more space to start a food garden as a means to feed her family. She says the lack of water has made it difficult for her family to survive. “Government is constantly encouraging families to plant their own food, but how are we supposed to grow food when we struggle for drinking and cooking water?” she asks.

Resident Nongcebo Ngidi says: “It has become clear to us that the situation will not be addressed anytime soon. Because this place is rural, the municipality disregards us.”

“The least we are asking for is clarity on what the issue is and when it will be fixed,” she says. Ngidi says poor households suffered the most by the lack of services. “We have no car or wheelbarrow to go long distances to fetch water. We wait and make do with the little we get.”

Mayisela urged residents to contact the call centre on 080 13 13 013 should the water not arrive soon.