City says it is committed to building houses on the land 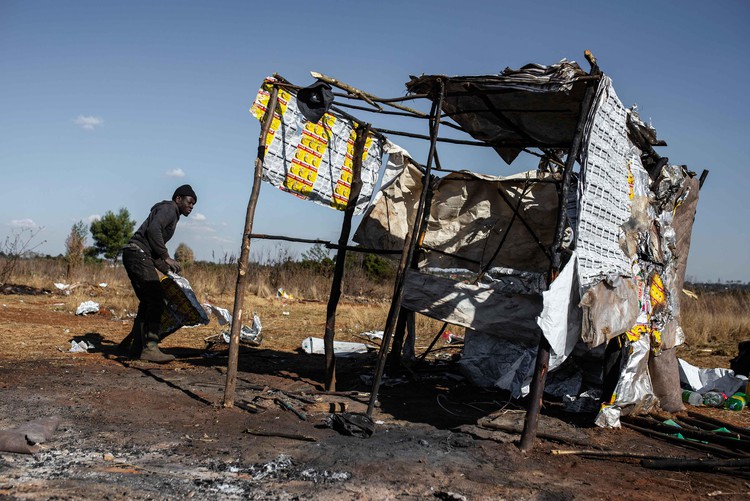 Bongani Siwela rebuilds his shack with paper after it was demolished by the Ekurhuleni Metro Police Department during an eviction. Siwela, who is unemployed, makes a living by recycling plastic and paper. He moved to this area because he could not afford the R750 rent which he was charged in Tembisa to stay in a backyard shack. Photo: Ihsaan Haffejee

Land occupiers in Tembisa say they have been at the receiving end of violent, persistent and unlawful attacks by police, with the most brutal attack taking place on Monday, 30 July.

Shack dwellers on the land, which they have named Phumula Mqashi, were allegedly stripped naked and beaten by both Ekurhuleni Metro Police Department (EMPD) and South African Police Service (SAPS) members from Tembisa. Their makeshift shacks were burnt.

After the last operation by both EMPD and SAPS, no shacks were left standing. The occupation site was littered with the remains of burnt out shacks.

Tear gas was used and rubber bullets discharged according to Kgomotso Mogeshoa. She says she and another community leader were targeted, chased and threatened with arrest for their involvement in the land occupation.

Mogeshoa said police were at the land occupation from 10am to 1pm on 30 July, travelling in minibuses and trucks. She says mattresses, blankets, clothes, and sponge mattresses were set alight. Residents who took videos and pictures had their phones confiscated.

“They shot at us [with rubber bullets] and stripped the men naked, beat them and threw teargas. There are also babies here. There is nothing they didn’t leave. They burnt everything … Even now, I don’t know what is going to happen,” she said. 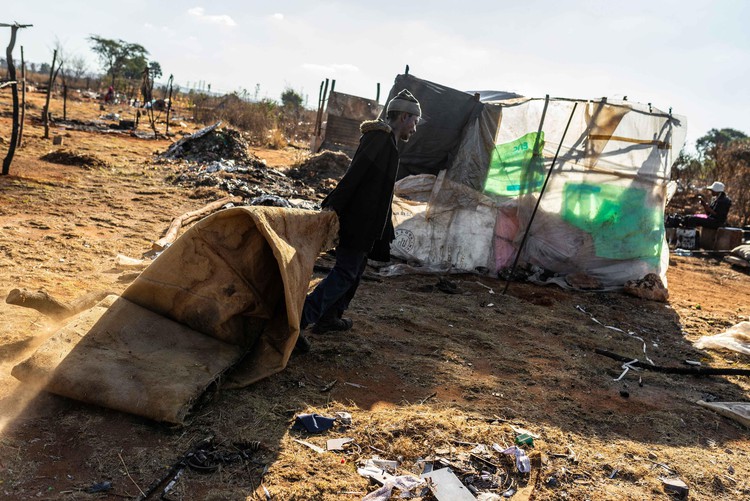 Eric Qeqe drags a used carpet that he will use as a roof as he rebuilds his shack after it was destroyed. Photo: Ihsaan Haffejee

Mogeshoa said they would continue to occupy the land despite the action of the authorities, adding that they had nowhere to go. They have been on the land since mid-February.

Residents say that a month ago, three people had to be sent to hospital after law enforcement assaulted community members. One elderly woman was recently discharged. Residents said a woman was seriously injured when her shack collapsed after it was set alight.

James Nthau said he was given no warning. “They came while I was taking a bath. I was naked, and they just dismantled my shack. They took pictures and made fun of me,” said Nthau.

He said his building materials were then set alight by police.

Nthau said he had rented a garage for R1,000 a month until he lost his job as a security guard. “My wife sells goods on the side of the road, and she is the one who is struggling to pay for the kid’s school. The [child] grant money is not enough,” he said. “All my dreams are in this place.” 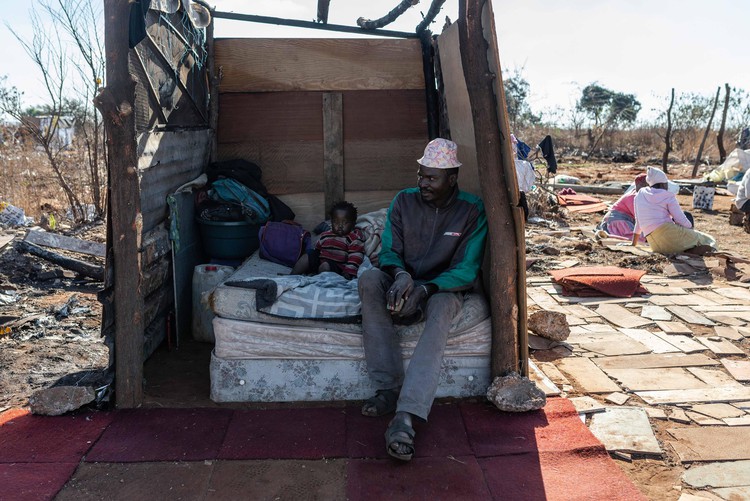 Daniel Malatji and his 18-month-old daughter Modjadji sit in the remnants of their shack. Photo: Ihsaan Haffejee

Sipho Nene, another occupier, says that on 30 June he was assaulted by police at the site of the land occupation and then detained in Kempton Park. He claims he was beaten with a crowbar, pointing at various marks on his right hand. He did not lay a criminal charge.

Anna Mnisi said her teenage grandson was assaulted on 2 July while taking pictures of the police.

“They manhandled him and told him to hand over his phone. They asked if his father had bought him the phone to record police. His pregnant aunt was pushed to the ground when she tried to intervene … We are always scared; they have no heart,” she said.

Mnisi said she lost her SASSA card when her shack was set alight by police while she was away fetching firewood.

The evictions on 2 July prompted the National Union of Metalworkers of South Africa (NUMSA) to condemn the attacks on residents.

City of Ekurhuleni spokesperson Themba Gadebe said that the area was intended for various development projects, and residents had settled illegally on the strip of land.

“The area has already been declared a township and in the current financial year, we are beginning with the designs and upgrades.” He said the municipality had a court order against the occupation dated September 2015.

“The police were acting in accordance with the court order. We must continue to call on our people to desist from illegal occupation of land because it is at times a sabotage of a development that will benefit them such as it is the case with the Essellen Informal Settlement,” he said.

He said the land was set aside for houses that the City had committed itself to build.

But Mnisi does not believe the houses will materialise.

“We will die before we even see those RDP [houses]. My daughter applied in 1996 and died and her house is still not out. We don’t steal, we sell veggies and rely on grants. Why do they harass us like this?” she asked.

Nthau said police had been to the land occupation more than 14 times. They had used rubber bullets, and demolished and burned shacks.

On Tuesday, 24 July, EMPD told the occupiers that they have two weeks to leave the area. Mogeshoa said they had sought legal help from a private lawyer. On 25 July occupiers reported that the EMPD had returned and burned down more shacks.

At the time of the attacks from authorities in July, EMPD’s Wilfred Kgasago said people had been warned to leave the land and that law enforcement would ensure that no new structures were erected.

“Allegations that the EMPD has burnt their stuff is devoid of the truth. Once the structures are removed, the EMPD either allow them to remove the materials or are taken in trucks to storage facilities.

“At one point it was proven that those injured was because of conflicts among the groups illegally invading that piece of land,” he said at the time.

Following the evictions on Monday, EMPD’s Kgasago directed queries to Director Joseph Machete who did not immediately respond.

Norkem Park Warrant Officer Mahlodi Langa said police were acting on instruction based on a court order from the High Court stating that the land belongs to the municipality and that is has been set aside for the development of RDP housing.

Langa said he knew nothing about violence being meted out to community members, adding that no case had been opened against any members of SAPS.

This article was updated with comment from Warrant Officer Mahlodi Langa. It originally quoted Norkem Park SAPS spokesperson Captain Lesibana Molokomme who said he had not received any information about the incident. (He was on leave at the time). 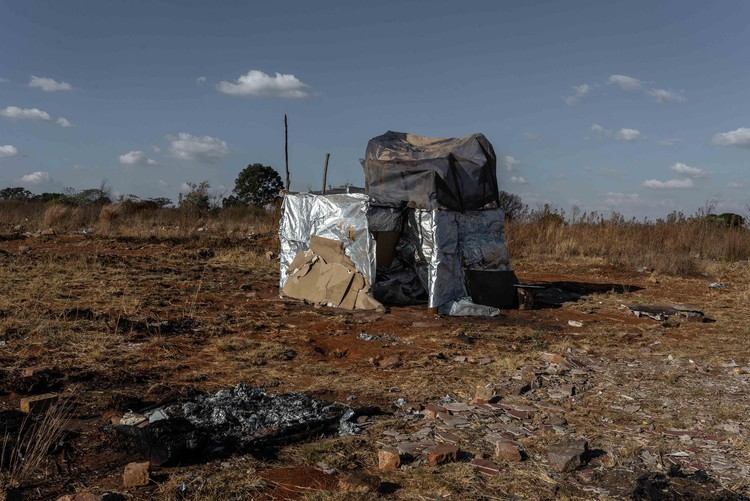 The remains of a shack that was allegedly set alight during an eviction. Photo: Ihsaan Haffejee