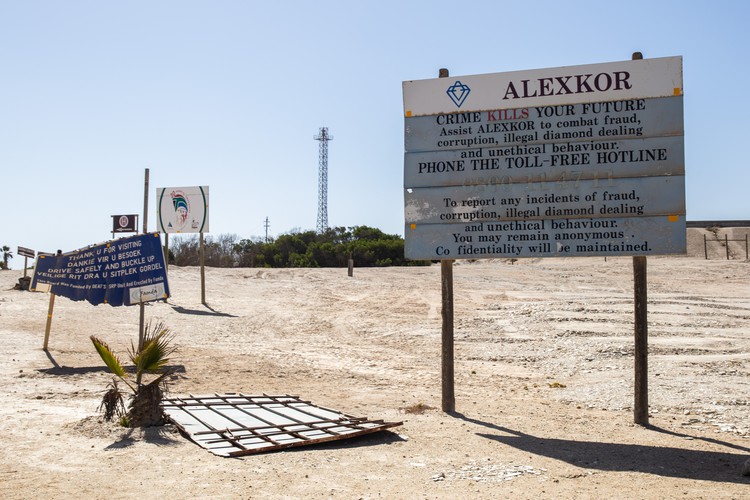 Alexkor in Port Nolloth is facing criminal charges for buiding coffer dams to hold back the ocean. Photo: Ashraf Hendricks

The Department of Forestry, Fisheries and the Environment has laid criminal charges against state-owned diamond mining company Alexkor* for the construction of coffer dams in the diamond-rich beach sections of the Northern Cape coastline.

The “Green Scorpions” environmental inspectorate of Minister Barbara Creecy’s Department has told Alexkor that “serious damage has been caused as a result of the mining methods being used”. The case docket is currently being assessed for prosecution by the Director of Public Prosecutions in the Northern Cape.

Coffer dams are temporary sea walls built to hold back the ocean from the intertidal beach area and shallow surf zones while miners access the diamond-bearing gravels under the beach.

According to documentation related to the case, Alexkor contractors have been using rocks to shore up coffer dam walls since at least 2014. But dumping such “foreign” shore-based material in these sea structures is prohibited by national environmental legislation, and for years there have been vociferous complaints – particularly from small-scale diamond divers – about severe damage to the marine environment.

More recently, in October last year, the traditional small-scale fishing community of Port Nolloth also raised their voices, appealing to Creecy to impose a moratorium on all coffer dam mining and hold a full inquiry into the use of these structures because of their “disastrous consequences for the marine environment and for the livelihoods of the small-scale, artisanal divers and fishers”.

“We as small-scale fishers believe that the cumulative impacts of the illegal construction of these dams using foreign material for at least seven years and the failure to rehabilitate the areas, on top of the prior and continuing beach mining and other mining activities, has pushed this coastline and the resources upon which we rely into a highly impacted state.”

“In the absence of reliable and appropriate monitoring and no baseline, we believe that the coffer dams must please be stopped in line with the precautionary approach,” members of the Aukatowa Small-scale Fisheries Cooperative said in their letter and accompanying report to Creecy.

The cooperative was registered in 2018 to represent the small-scale fishers of Port Nolloth.

Because of complaints, the Green Scorpions launched an investigation into the use of coffer dams in May 2020, but progress was slow because of the painstaking legal procedure for enforcing environmental legislation.

Clearly unhappy with what they found in the beach mining areas, the Green Scorpions issued Alexkor with a “Notice of Intention to issue a Compliance Notice” in November 2020 and then a “Pre-compliance Notice” the following month. These were followed by a Warning Letter in February 2021.

In response, Alexkor submitted representations to the Department, including reports by the company’s specialist consultants on the environmental management programme for its mining operations. But these reports were not approved by the Department, and a Compliance Notice dated 29 July 2021 and signed by the Chief Director for Enforcement (Environmental Management Inspector Frances Craigie), was served on Alexkor. 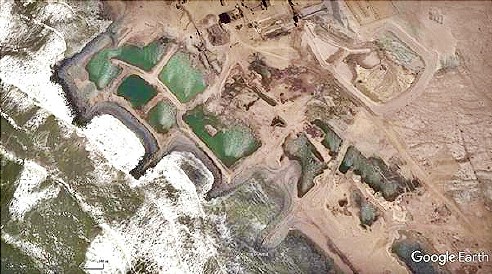 Craigie states in the Notice that Alexkor “failed to adhere to the provisions of environmental law in respect of the activities conducted by Alexkor at the Orange River Mouth in the Northern Cape Province” and that “serious damage has been caused as a result of the mining methods being used”.

According to the Notice, Alexkor started operations without the necessary authorisations in terms of the national Integrated Coastal Management Act.

The Notice orders Alexkor to stop using rock for the stabilisation of coffer dams within 15 days of receipt; to submit within 60 days an updated version of its specialists’ report; and to implement actions set out in this amended report in line with the Department’s approval.

Alexkor was warned that should it fail to comply with the Compliance Notice, it would be committing a further offence.

The company was allowed to make representations to the Department about the requirements in the Compliance Notice, to submit an objection to Creecy, and to ask for the Notice to be suspended.

But last week, the Department told GroundUp in response to questions that Alexkor’s application for suspension of the Notice had been refused. This meant that Alexkor had to comply with the Notice, irrespective of any decision on its objections.

The Department also said that “arrangements are being made” for officials to establish the current status of the Alexkor operations, relative to the suspension decision, and that the mining company had not complied with the instruction to submit an updated report within 60 days.

“The Department will request the Director of Public Prosecutions to consider adding a charge of non-compliance to the Compliance Notice into the ambit of the investigation/docket which has already been referred to them,” it said.

Creecy had announced the criminal charge in a written response to a question in the National Assembly in December. She confirmed that a case had been lodged at the Alexander Bay police station, that the investigation had been completed, and that it had been submitted to the Northern Cape’s Director of Public Prosecutions (DPP) for a decision on whether to prosecute.

Last week, Northern Cape DPP regional communications manager Mojalefa Senokoatsane confirmed to GroundUp that the case docket had been received. He said a decision on prosecution had not yet been taken and he could not give further information on the case “due to its seriousness and as the investigations are ongoing”.

In response to a series of questions sent by GroundUp to Alexkor with an invitation to comment, Alexkor chief executive officer Lemogang Pitsoe replied: “Your email is noted. Kind regards.”

As of Monday this week, Creecy had not responded to the letter and report from the Port Nolloth fishing community requesting a moratorium on coffer dams.

This was confirmed by Christiaan McKenzie, one of the Aukatowa Small-scale Fisheries Cooperative directors. “No, not a word,” he told GroundUp.

* Alexkor is shorthand for the Alexkor Richtersveld Mining Company Pooling and Sharing Joint Venture (PSJV) that was formed between the government-owned mining entity and the Richtersveld community after they had won a huge land restitution claim that included land-based mining rights in 2007. Alexkor has a controlling 51% interest in the joint venture and the community holds 49%.