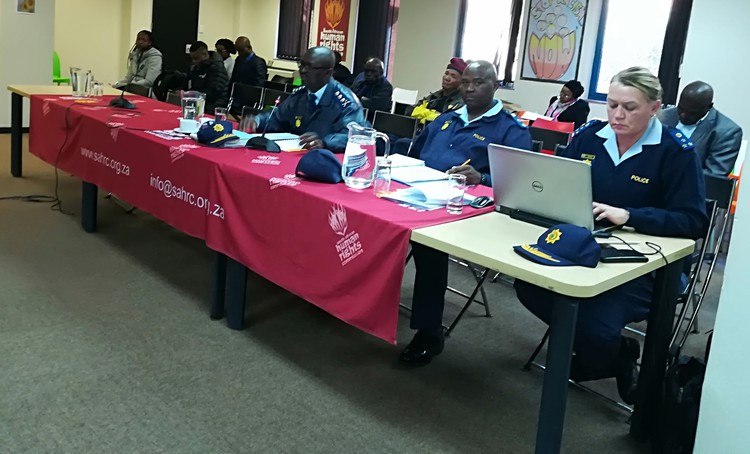 There is about one police officer per 730 residents in Alexandra, according to Gauteng South African Police Service (SAPS) Commissioner Elias Mawela. This is well below the national standard for police to community ratio and the ratio recommended by the United Nations (UN).

Mawela was speaking at the inquiry into Alexandra by the South African Human Rights Commission (SAHRC) and the Public Protector’s office on Tuesday. This was the third sitting of the inquiry.

The inquiry follows a spate of protests in April. Its purpose is to consider some of the issues raised during protests such as the lack of housing, water, sanitation and overcrowding in the township. The inquiry will also look into allegations of corruption in the Alexandra Renewal Project (ARP) — a project initially worth R1.3 billion, launched in 2001 to develop Alexandra.

The UN’s recommended policing ratio is one police officer to 288 residents and South Africa is currently averaging one officer to 348 residents, Mawela told the panel. Based on a census in 2014, he said there were about 177,000 residents in Alexandra and 243 police officers operating in the area. (The 2011 census gives the population of Alexandra as nearly 180,000. Unless there has been an exodus from the township, by GroundUp’s estimate the population would have grown to roughly 205,000 to 215,000 in 2019.)

“We are not even close to the national or the UN ratio … but that doesn’t mean that we are unable to render the basic policing services to the community of Alexandra,” he said.

Senior Legal Officer on the panel Alexandra Fitzgerald urged SAPS to look for the latest population statistics in Alexandra “because some have even put it at 500,000 which may mean you are further away from the UN and national standard ratio than you think”. (It is extremely unlikely that Alexandra’s population is as high as 500,000.)

Mawela said the station resource allocation was calculated using an efficiency index which largely depended on population size. In Alexandra, he said they “currently do not have what we want”. He said the station should have at least 70 more staff members than it currently has.

But Mawela said in the last financial year, despite being under-resourced, the Alexandra police station had managed to remove itself from the top 40 police stations with the most serious crime statistics.

But Fitzgerald asked: “Underreporting [of crime] is a problem in the country and on our visits to Alexandra, a lot of residents said they had no trust in SAPS, so how much of those statistics can you say is a result of distrust between the community and the police?”

“I can’t say that it doesn’t play a role in the statistics, but there is nothing we can do about that except encourage the community to report crimes and work with the police,” answered Mawela.

He denied that there was complete lawlessness in Alexandra as others had alleged in their submissions to the inquiry.

“Many people go about doing their day to day activities …There are many law-abiding citizens in Alex … Crime is happening all over the country and in Alex as well, but to reduce it to lawlessness is unfair,” he said.

“Maybe they have a different definition of lawlessness but from our side, Alexandra is not lawless.”

The inquiry continues on Wednesday.