“Kathy” was one of the most well-known, well-liked and respected leaders of the South African revolution 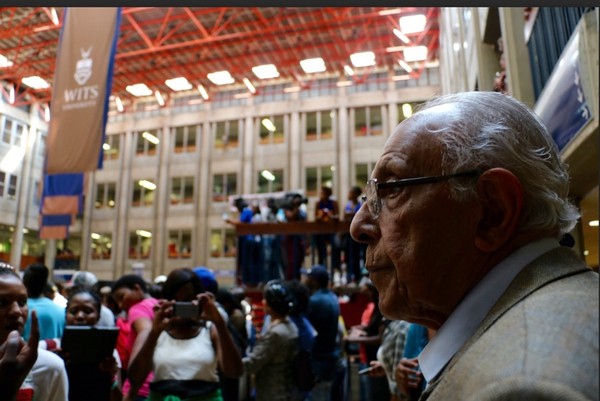 Ahmed Kathrada at Wits University in 2015. Photo by Yumna Mohamed.

Ahmed Mohamed Kathrada, affectionately known as Kathy, has died at the age of 87 in the Donald Gordon Hospital in Johannesburg (born in Schweizer-Reneke on 21 August 1929, died Johannesburg on 28 March 2017). A statement released by the Ahmed Kathrada Foundation said that he passed away peacefully after a short period of illness, following surgery to the brain.

Kathrada was one of the leading Rivonia trialists and spent 26 years as a political prisoner under the Apartheid government. “This is great loss to the ANC, the broader liberation movement and South Africa as a whole. Internationally, he was staunch in his support for the Palestinian struggle. ‘Kathy’ was an inspiration to millions in different parts of the world,” said Neeshan Balton, Executive Director of the Ahmed Kathrada Foundation.

Kathrada was, along with Nelson Mandela, Walter Sisulu and Oliver Tambo, at the forefront of the struggle for liberation. He remained an ANC member until he died, but in recent years he has been critical of the direction of government. In October his name appeared at the top of a letter addressed to the current leadership of the ANC, accusing the party of failing the people of South Africa.

Kathrada frequently engaged with youth leaders and led trips to the former Robben Island prison. In 2015 he went to Wits University to meet with Fees Must Fall protesters, saying “I am inspired by students’ spirit and discipline.” He met often with and inspired the leaders of Equal Education, Social Justice Coalition and other activist organisations, making his home available to them for meetings. He was outspoken too in his support for Palestinian freedom.

He is survived by his wife Barbara Hogan, a former political prisoner and former Minister of Health.

Ahmed Kathrada’s funeral will take place on Wednesday 29 March commencing at 10am at the Westpark Cemetery, Beyers Naude Drive, Johannesburg.

Members of the public are welcome to attend the funeral ceremony.

The programme will include a political tribute session starting at 10am organised by the Ahmed Kathrada Foundation. Former President of South Africa and Board member of the Kathrada Foundation, Kgalema Motlanthe will speak at the event. Anti-apartheid struggle stalwart Sophie Williams-de Bruyn, a former Robben Island prisoner, and a family member will also address the mourners.