“I don’t know what to do. I’ve tried everything” says 75-year-old Elsie Dopholo 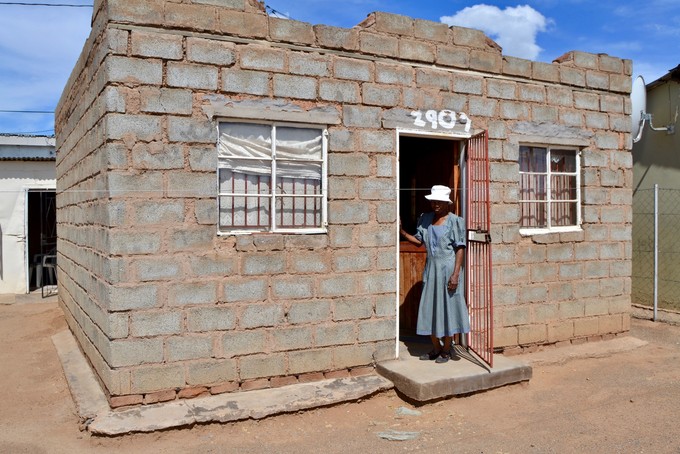 Elsie Dopholo from Unifound Location in Queenstown, Eastern Cape, has been trying to get her RDP house fixed for the past 16 years. Photo: Maqulo Nyakombi

Elsie Dopholo from Unifound Location in Queenstown, Eastern Cape, who is 75, says she has been in and out of the Lukhanje Local Municipality begging officials to fix her RDP house for the past 16 years.

Dopholo’s house was built in 1999. The walls have cracks and the roof leaks.

“In late 1999, I was told to sign for the house, but I refused because I saw that it was not properly done,” says Dopholo. “I only took the keys because the house was built on my site. I made it very clear that I’m not going to sign for this house, until they fix it.”

Dopholo lives in a two-roomed shack, built next to her RDP house. The shack also has a leaking roof.

She says officials from the municipality visited her house several times and took pictures. But nothing happened. As a last resort she wrote to Minister of Human Settlements Lindiwe Sisulu in March.

“In April, I received a response. They said they received my letter and they promised to assist me,” she says.

A local official, she says a “Mrs Bham”, visited her in August.

“She asked me why I signed for the house if I was not happy with it. I told her that I did not sign for the house. She left and promised to come back, but she never did,” says Dopholo.

Dopholo says in winter her shack is very cold and in summer it is so hot she struggles to stay indoors because of the heat. Dopholo is not in good health. She recently spent several days in hospital.

“I don’t know what to do. I’ve tried everything,” she says.

Spokesperson for the Minister of Human Settlement Ndivhuwo Mabaya said the matter was referred back to Lukhanje Local Municipality for investigation.

GroundUp made several attempts to get comment, but the spokesperson and the responsible official at the municipality remained unreachable.