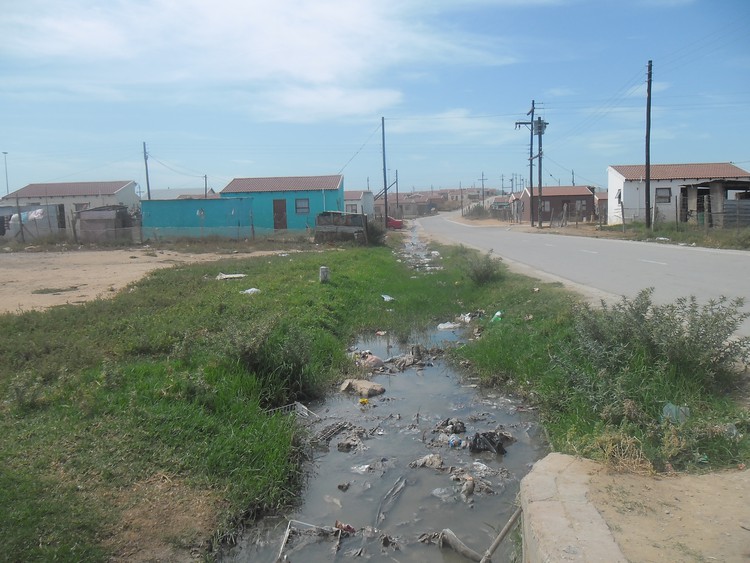 Residents of Valencia in Addo complain about frequent sewage spills into their streets. Photo: Joseph Chirume

Residents of a small Eastern Cape town say the sight and smell of human excrement has become part of their daily lives as the sewerage system is old and failing.

In Valencia location in Addo problems from the sewerage works nearby is getting worse, say residents.

Gwede Macheke lives opposite the pump station. He said the recent sewage flow started two weeks ago. “I was told by some officials that the problem could be a poorly-built underground system that is now failing to deliver or is overwhelmed.”

“What irritates residents most is the recurrence of the problem. Hardly two weeks pass without our streets getting covered in sludge. We have a very serious problem that needs urgent response … The municipality should tell us the causes of the problem. We are really angry.”

Another resident, who identified herself by her first name only, Sarah, said there were no parks in the area and children played in the filthy streets. “We have on numerous occasions pleaded with the municipality to sanitise the streets, but our pleas are falling on deaf ears.”

“It seems the underground pipes have problems because whenever one manhole bursts, other pipes burst too. We can’t live with raw sewage on our doorsteps.”

A resident of Vygie Street, about two hundred metres from the pump station, said whenever there is a sewage spill or too much rain, the dirty water collects on the road.

“Water has been going backwards along the pipelines, affecting residents. This is mainly because the system was badly constructed,” said Nzuzo.

He said it was not true that the municipality took a long time to respond to complaints. “We carry out water jetting of the sewer system every second week to clear the drains of foreign objects.”

“These objects are thrown in by residents and end up blocking the entire system. Time and again, we have taken out vehicle tyres, chairs and clothes … at the sites of blockages. This is another contributing factor to the sewerage problem in Valencia location. At present we have a contractor on site who is busy clearing our drains.”