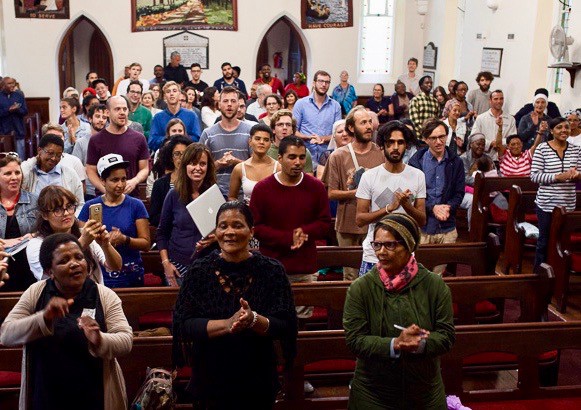 Residents, supporters and activists filled the Methodist Church in Sea Point, vowing to continue to campaign for social housing in the area. Photo: Ashraf Hendricks

About 150 residents, supporters and activists filled the Methodist Church in Sea Point until late on Thursday, vowing to continue to campaign for social housing in the area.

This follows an announcement by the Western Cape Cabinet on Wednesday that the Tafelberg sale to the Phyllis Jowell Jewish Day School would proceed and the site would not be used for social housing.

Reclaim the City campaigners, who have been advocating for social housing in the city centre and surrounds, said they “would not give up” fighting for the Tafelberg site.

Annie Bezuidenhout, a Reclaim the City committee member and domestic worker in Sea Point, said that after fighting for social housing for over a year, she thought the outcome would be positive, but instead it was “really disappointing”.

She currently lives on the property of her employer. Her wish is to have her own place.

“We are emotional about the whole issue,” said Elizabeth Gqoboka of Reclaim the City. “We thought the local government was behind us, but everything fell on deaf ears.”

“This is a devastating decision on one hand, but also a very big opportunity to use Tafelberg as a symbol for building a more inclusive and desegregated Cape Town,” said Emile Engel of Ndifuna Ukwazi.

Cabinet had also announced it would consider the Helen Bowden Nurses Home near the V&A Waterfront and the Woodstock Hospital as sites for affordable housing. Both sites have been closed for many years.

But Engel said the statement was “far from a real commitment”.

“What they’re actually saying about the Helen Bowden Nurses Home is…they will put it on the market, like they did with Tafelberg. People will tender for it and then there will be a condition attached for affordable housing,” he said.

Sarita Pillay, a researcher at Ndifuna Ukwazi, said that a feasibility study of the Woodstock Hospital site in 2012 showed that it was perfect for affordable social housing. But a similar study had been done on the Tafelberg site too, she said.

“The need in Woodstock for affordable housing is probably amongst the most pressing in the City,” said Pillay.

Reclaim the City plan to picket at the Tafelberg school site from 4:30am on Monday.