The road will bring destruction to the Wild Coast, they say. But SA National Roads Agency disagrees 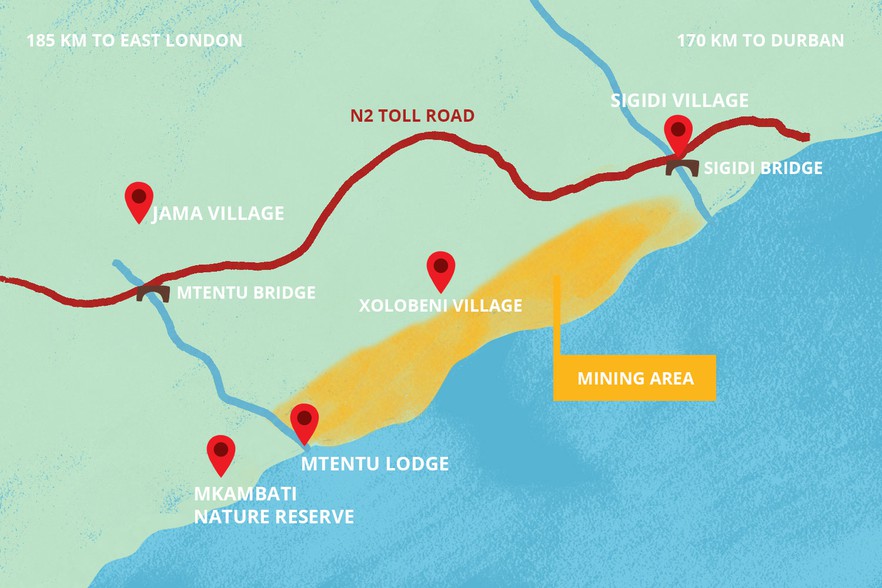 The Amadiba Crisis Committee (ACC) has sent a memorandum to President Cyril Ramaphosa, urging him to support their battle against the planned N2 Wild Coast Toll Road, which they say will lead to developments that will disrupt their way of life.

The Presidency announced that on Thursday 22 September, Ramaphosa would visit part of the road already under construction in Lusikisiki. In its press release, the Presidency says that the N2 Wild Coast road will “catalyse economic growth at a national, provincial and local level.”

The ACC, which has its roots in a battle against a proposed sand mine in Xolobeni, has members from across the Umgungundlovu coastal area. They say the road will divide the community, threaten the livelihoods of community members, and subsidise the proposed mine and other developments. The toll road, they say, will bring unwanted development that threatens the current use of communal land for subsistence farming and will destroy the sustainable ecotourism in the area. They want the road’s route to be moved at least 10km from the coast.

According to the ACC, the Eastern Cape MEC of Public Works Babalo Madikizela told Amadiba community members at previous meetings that they were “sitting on gold” and that the coast would be transformed to become a “smart city”, with reference made to Dubai. The ACC sees this as a direct threat to the community’s way of life.

The activists claim that the MEC even expressed an intention to build his own hotel on the coast. The local municipality’s planning documentation does indeed refer to a “city on the coast” and foresees future mining activities in the area.

Other community members and local stakeholders are in support of the road, which they say will bring jobs and economic development. We previously reported on community members’ views on the road and mine.

The ACC’s current fight centres around Sigidi village, which the planned N2 Toll Road would cross. Sigidi is the only village within Amadiba still to make a community access agreement with SANRAL. Meetings between the Sigidi community and SANRAL have been disrupted by the ACC.

At a meeting in Sigidi on 10 September, called by MEC Madikizela, the police used teargas and stun grenades to break up a fight between the ACC and supporters of the road. Although a community vote had originally been planned, after the disruption by the ACC Madikizela instead held a smaller “stakeholder meeting” with Sigidi residents, traditional leaders, SANRAL delegates, members of the ACC, and other stakeholders.

SANRAL told GroundUp that at the meeting, two families who would be directly affected by the road were in support of the project.

According to preliminary aerial surveys conducted by SANRAL, four homesteads in Sigidi are within or just next to the road reserve and the land of a further six households would be affected.

There are a total of 107 households in Sigidi, with on average 15 people per household, the ACC says. The committee says those in favour of letting the N2 cross the village are in a small minority in Sigidi and the “stakeholder meeting” held by the MEC on 10 September was not representative of the community’s will.

The committee’s legal argument relies on the Interim Protection of Informal Land Rights Act (IPILRA), which says that where land is held communally, as in Umgungundlovu, the community must give consent to be deprived of the land “in accordance with the custom and usage of that community”. The “custom and usage” of the Amadiba community, the ACC’s legal team says, relies on traditional courts called Komkhulu (“great place”), which meet every Thursday to discuss matters that affect the community.

The ACC says that although SANRAL agreed in the past to attend meetings at Komkhulu, the road agency has instead opted to hold meetings in areas where it enjoys support, or to seek majority votes outside of Komkhulu, which the ACC says is incompatible with customary law.

Decisions at Komkhulu are not made on a majority basis. Instead, when community consensus is not reached, the issue is laid to rest. “SANRAL and the municipality refuse to acknowledge the Umgungundlovu Komkhulu because the Council and the Headwoman follow the will of the community,” says the ACC.

According to the committee, the MEC and SANRAL have chosen to engage with those who will in some way profit from the mine and other developments, with local politicians, and with Chief (iNkosi) Lunga Baleni, who is an executive of the mining company which hopes to extract minerals from sands in the area.

SANRAL also disagrees with the committee’s interpretation of previous resolutions that meetings would take place at Komkhulu. The roads agency says it adheres to customary law based on consultations with traditional leaders. The provisions of IPILRA are followed during land acquisition, which involves community meetings which usually end with consensus, SANRAL says.

And, says SANRAL, most people in Amadiba are in favour of the road.

The ACC also says that because SANRAL’s surveyings involve the digging up of land and installation of steel rods and concrete blocks, they do amount to land deprivation and therefore IPILRA should be followed when making a community access agreement. In addition, says the committee, the SANRAL Act requires SANRAL to get consent from a land owner before entering a property for surveying.

Asked by GroundUp to respond to this, SANRAL maintained that the community access agreements are not legally required.

In response to an affidavit by Mpumelelo Mdingi, a resident of Umgungundhlovu, which tells of an unannounced meeting held between SANRAL and mine supporters and alleged trespassing by SANRAL’s delegates, the agency says that the ACC “are known for prompting local supporters to sign misleading, speculative, and incomplete affidavits”.

SANRAL insists that its public participation process, starting in 2001, has been extensive and constructive. Although the Environmental Authorisation for the whole road was challenged in the Pretoria High Court by local environmentalist Sinegugu Zukulu, it was upheld by the court and Judge Cynthia Pretorius commended SANRAL on the public participation process in her ruling.

SANRAL says that the N2 Toll Road will bring economic development and provide access to markets. Under/over passes will be provided at regular intervals, safe interchanges for access and improved local access roads will increase accessibility, mobility and connectivity.

SANRAL also claims that “the proposed route through Sigidi only affects a limited area of grazing land and does not affect any ploughed fields”. In addition, a biodiversity offset programme is planned to create over 15,000 hectares of new protected areas. The road will thus create new opportunities for eco-tourism adventure tourism and conventional tourism, SANRAL says.

But the ACC is not convinced. The committee says that SANRAL’s Environmental Impact Assessment “foresees consequences for the community including landlessness, homelessness, joblessness, economic and social marginalisation, increased morbidity and mortality, food insecurity, loss of access to common property resources, and social and cultural disarticulation/disruption”.

According to the ACC, SANRAL has not followed the experts’ advice to lessen these effects by developing a resettlement action plan in line with best practice set by the International Finance Corporation and World Bank. “There is no mitigation of the devastation their own experts foretold,” the committee says.

But SANRAL says though its resettlement action plan does not align to World Bank guidelines, it has been approved by the Department of Environmental Affairs.

In response to the ACC’s proposal for an alternative route for the road further inland. SANRAL says this was found not to be feasible for a high mobility freight route in 2008. “The route approved by the Department of Environmental Affairs is the best route from a combination of economic, social, and environmental factors,” says Mona.

“There is nothing in the documents submitted as part of SANRAL’s environmental authorisation application that suggests the inland route is infeasible,” the ACC says. “What is most disappointing about SANRAL’s falsehoods about the alternative route is that a process was previously initiated by MEC Madikizela to engage with the Umgungundlovu Community about why we think the old route is both preferable and feasible. These engagements never happened. Instead we were told by MEC Madikizela that the decision about the route had been taken and is final.”