“Leave this building, you cannot stay here. This building doesn’t belong to you!” 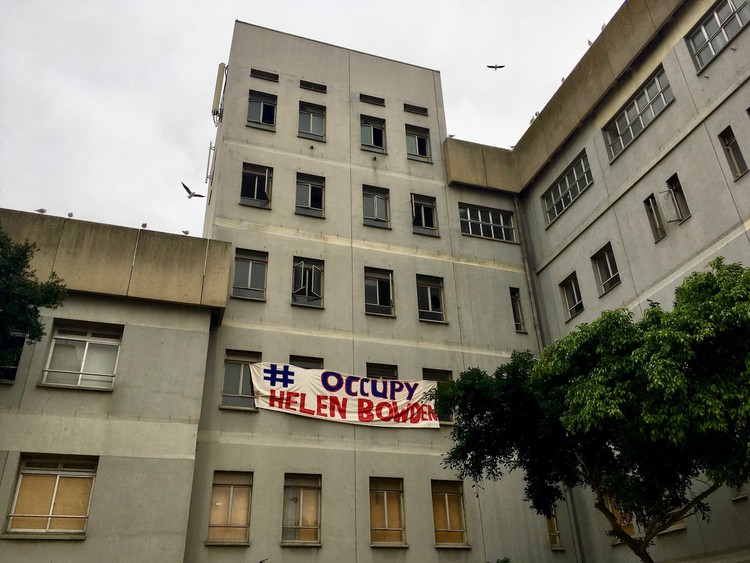 The old Helen Bowden Nurses Home near the V&A Waterfront has been occupied since March by housing activists. Photo: Ashleigh Furlong

After an armed attack on Helen Bowden Nurses Home on 19 July, Reclaim the City (RTC) claim that the attack was “politically motivated”.

The property is being occupied by RTC activists who are campaigning for affordable housing in or near the Cape Town CBD. The nursing home is in the Somerset Hospital precinct next to the Waterfront. It is owned by the provincial government.

The occupiers lodged a complaint with the South African Police Service (SAPS). Warrant Officer Jakobus Marthinus told GroundUp, “This case is receiving the necessary attention and the investigation is still pending. Nobody has been taken in for questioning as yet.”

Shiela Madikana is one of several occupying activists that suspects that one of the security companies tasked with protecting the premises is behind the attack. She told GroundUp that the manager of Masiqhame Security Solutions (MSS), Eddie Cloete, came to the property on the day of the attack and told her: “I will deal with you my way”.

A statement released by RTC on 21 July said that at about 8:30pm on 19 July, at least eight armed men forced into the building and approached the communal room where the occupiers were having a house meeting.

Luyanda Mtamzeli, Political Organiser for RTC, said there were about 35 occupiers in the building at the time of the attack. He said the attackers attempted to push through the door but the occupiers secured it. The attackers proceeded to break the windows screaming: “Leave this building, you cannot stay here. This building doesn’t belong to you!” while pointing firearms, pangas and knives at the occupiers. Nothing was stolen and no one was injured. A pellet gun was later found on the scene and is being kept as evidence by police.

When asked for comment, Cloete told GroundUp: “I don’t want to comment on that. You can call the Department of Transport and Public Works and they will be able to assist you.” Before GroundUp could ask specific questions, he hung up the phone.

The manager of DCS, known only as Mr. Peterse, had agreed to meet with GroundUp but was later instructed by his Operations Manager not to talk to the media.

Siphesihle Dube, spokesperson for the provincial Department of Transport and Public Works, said that MSS was hired based on a tender application. He explained that DCS, the company originally hired to secure the property, was hired on a month-to-month contract but their contract was later terminated so that a security service provider could be employed within the tender framework. This is when MSS was employed as the security service provider.

“As you are aware the site is currently being occupied unlawfully. The department has a responsibility to secure this and other vacant properties in the Western Cape Government’s property portfolio,” Dube told GroundUp.