Athlone residents speak out against violence against women 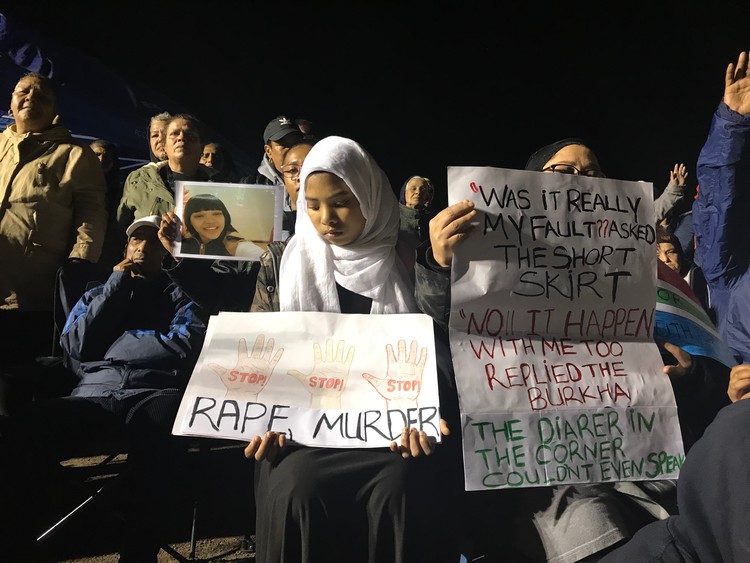 Relatives and supporters attended a a prayer service in Athlone on Thursday, in memory of some of the young women and girls murdered in recent weeks. Photo: Tariro Washinyira

Dozens of people gathered opposite the Joseph Stone Auditorium in Athlone on Thursday night for a prayer service in memory of some of the young women and girls murdered in recent weeks.

The event coincided with protests by thousands who gathered outside Parliament for a second day of protest on Thursday, calling on president Cyril Ramaphosa to take action against violence against women. The protest was sparked by the rape and murder of University of Cape Town student Uyinene Mrwetyana at a post office and of University of the Western Cape student Jesse Hess in her flat last month. The protests are expected to continue on Friday.

In Athlone, mourning relatives, friends and supporters held candles engraved with the names and photographs of the murdered women. Some messages and posters read: “Remembering our children”, “Stop rape, murder” and “No means no”. During the service, people who had lost relatives to violent crimes were called up for a prayer. The families asked not to be approached by journalists at the event.

Lynn Hill, who is a life coach and writer, shared her experience: “I was raped by someone who belonged to my church at the age of 15. I was brutalised to a point that the police thought a train had ridden over my face. Tonight, we are saying to those queens, beauties and daughters that their deaths have not been for nothing.” Hill then recited a poem in memory of the murdered women and girls.

Caroline Peters has worked on gender rights for 30 years. On Thursday, she represented two organisations, Ilitha Labantu and 1000 Women 1 Voice. “A year ago, one in four women was affected by violence, but now it is one in three women. The ages of rape survivors are also becoming younger and younger,” she said.

One of the event organisers, Preston Jongbloed, said he grew up in Heideveld. A few years ago, his aunt was killed violently. He has been advocating against gender-based violence with his wife ever since.

Jongbloed recalled his eight-year friendship with Hess, 18, who was found murdered with her elderly grandfather in their Parow flat last week. He said Hess had been involved in school camps and a human traffic awareness programme that Jongbloed runs at schools.

Jongbloed said they encouraged young boys to respect women. “I am teaching my son that his mother, sisters, nieces or women around him are of value,” he said.