Activists occupy Cape Town building for over a month

“They thought if they switched the electricity off we were going to move out, but we won’t” 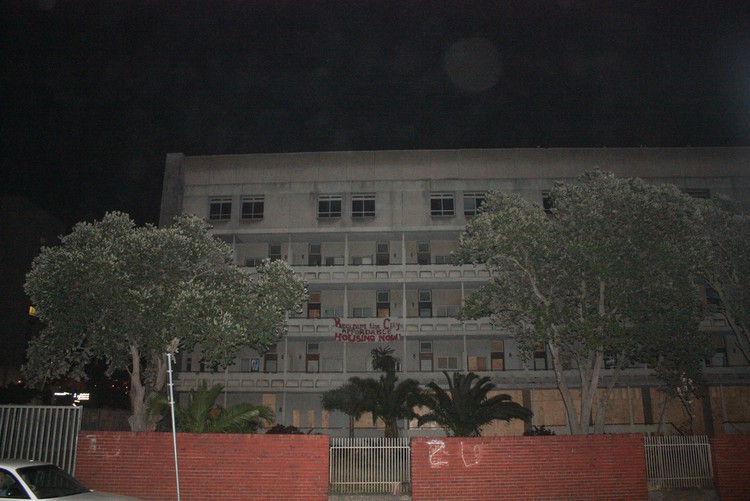 Living without running water or working electricity, occupiers at the Helen Bowden Nurses Home in Mouillie Point say they are committed to staying put until their demands are met.

“I am prepared to stay until the government and the Premier allow us to live here,” said occupier and Reclaim The City (RTC) chairperson Sheila Madikana, 51. She works as a domestic worker in Sea Point and rents a room there for her three children and granddaughter. She has been on the RDP housing list since 1997.

“I thought it was very important for me to come and occupy, because where we live it is very expensive,” Madikana said. “Every year the rent goes up. Sometimes it goes up so much that you can’t afford it… where I live I am paying R2,500 per month for one room.”

Fifteen people stay at the Bowden complex nightly, though Madikana said RTC hopes to slowly move more occupiers into now-empty rooms. People who live and work in Sea Point will be given priority to combat rising rent and long commutes. The occupation began a day or two before 27 March, after the provincial government decided not to build affordable housing at a property it owns in Sea Point called Tafelberg. Instead it is selling the property.

Activists want the Helen Bowden building and land it sits on to be used for affordable housing units. The Western Cape Government, which owns the Helen Bowden property as well as much of the adjoining land associated with the Somerset Hospital, has said that it is considering mixed-use development of the site, that would include affordable housing. But RTC has expressed scepticism of the province’s commitment because no concrete plans have been provided.

Without running water in the former nurses’ home, occupiers refill large drums from a tap at the rear of the building to be used for cooking, drinking and manually flushing the few usable toilets. The smell of sewage is strong, especially near restrooms which are in disuse.

Electricity, which was cut off by the City of Cape Town after the occupiers settled in the building, is substituted by candlelight and battery-powered torches. Cooking is accomplished with portable propane fuel tanks.

“They thought if they switched the electricity off we were going to make a plan to move out, but we won’t,” Madikana said. “We just went to go buy some more light and we brought some gas pots.”

Rooms where occupiers are staying have been cleaned and fitted with abandoned furniture found elsewhere in the complex including chairs, bed frames, side tables, and mattresses. Though requiring a deep clean and cosmetic updates, many rooms in the building are fitted with in-room sinks and cupboards. Elsewhere in the building, rubbish has accumulated, pests are present, and bird faeces have built up in rooms that are not properly secured from the outside, though this was all present before the occupation began.

“I hope [people] understand why we are doing this,” Madikana said. “We don’t do it just for pleasure, to live here like we are at Holiday Inn or we are on honeymoon. We are doing it for the struggle of the needs of the people.”