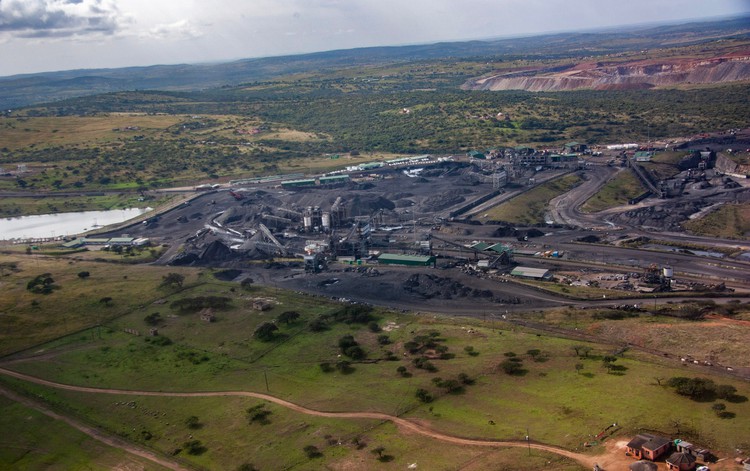 The Somkhele coal mine on the border of the Hlhulhuwe-iMfolozi game reserve in KwaZulu-Natal can continue its operations, a court has ruled. Photo: Roy Symons

A high court bid to close down Somkhele coal mine on the border of Hlhulhuwe-iMfolozi Park in KwaZulu-Natal was yesterday dismissed with costs.

The interdict application to halt operations at the Somkhele coal mine – one of the country’s largest suppliers of anthracite – was brought by the environmental advocacy group, the Global Environmental Trust (GET).

The application was supported by the Mfolozi Community Environmental Justice Organisation (MCEJO), which consists of 530 members of the neighbouring community, and Sabelo Dladla, a resident who lives within 300m of the mine.

GET contended that Tendele Coal Mining, which operates Somkhele mine, had no environmental authorisation in terms of the National Environmental Management Act (NEMA), no land-use authorisation from any relevant municipality, no waste management licence and no written approval to damage, alter, exhume or remove any traditional graves in terms of the KwaZulu-Natal Heritage Act.

GET argued that the mining operations were causing serious environmental harm, contributing to water scarcity and also having adverse health effects in neighbouring communities.

In his founding affidavit, Sabelo Ddadla had told the court that what was once a quiet rural setting alongside a wilderness area was now a vast industrial rock dump that damaged the environment and people living in the area.

In dismissing the application, Pietermaritzburg High Court Judge Rishi Seegobin said that the applicants had not given authorities the opportunity to fully investigate these complaints before deciding to institute court proceedings.

He also said: “It is one thing to allege a statutory breach. It is quite another to provide proof of non-compliance.”

Seegobin accepted Tendele’s argument that there was no need for environmental authorisations in terms of updated NEMA legislation, as the mining operations took place under valid mining rights and Environmental Management Programmes granted by the Department of Mineral Resources in 2007.

He said if the department was not satisfied with the mining operations at Somkhele, it would have requested Tendele to upgrade its Environmental Manalgement Programmes along the lines required by NEMA.

Seegobin said that relevant legislation also empowered both the Department of Environmental Affairs and the DMR “to direct a person causing significant pollution or degradation of the environment to cease such conduct. There is no evidence that the applicants sought to make use of any of these remedial measures or to engage meaningfully with the relevant authorities about Tendele’s alleged contraventions.”

He said the same applied to the contention that Tendele’s mining operations were unlawful because it had no land-use permission from any municipality.

Seegobin acknowledged that Tendele had never obtained municipal permission to mine in the area, but said the remedy for this was for the municipality to serve a contravention notice on the developer, and ultimately, if necessary, a prohibition order restraining illegal activity.

The applicants, said Seegobin, had “clearly not attempted to compel the relevant municipalities to invoke these provisions”.

On operating without a waste licence, Seegobin said the Minister of Enviromental Affairs had not yet called on Tendele to apply for a waste management licence. “I have no doubt he/she would have something to say if it was found that Tendele was acting unlawfully,” said Seegobin.

And on the issue of graves, Seegobin said while Tendele had openly admitted to desecrating graves in the past, it now worked closely with the provincial heritage agency and affected families to ensure that relocation of traditional graves takes place in accordance with law.

In conclusion, Seegobin said the applicants had “failed to put up cogent evidence to support their contentions that Tendele is mining unlawfully and without the requisite authorisations, environmental or otherwise”.

“The applicants have not made out a proper case for an interdict. They seem to have adopted a ‘scatter gun approach’ hoping to hit one target or another,” said Seegobin, dismissing the application with costs.

Citing testimony of Tendele’s chief operating officer, Jan Christoffel du Preez, Seegobin said the court could also not ignore the socio-economic impact that closure of Somkhele mine would have.

Du Preez had told that the court that the Somkhele mine not only employed 1,000 local people — mostly from the impoverished Mpukunyoni area — but also created opportunities for more than 200 local entrepreneurs who provided services such as transportation of anthracite to Richards Bay port, laundry services at Somkhele, and local transport and taxi services for Somkhele employees.

Somkhele was also one of the largest resources of open-pit mineable anthracite in the country and is the principal supplier of anthracite to the ferrochrome industry, said Seegobin.

“The ferrochrome industry on its own provides for employment of 20,000 in the country,” said Seegobin.

GET spokesman, Rob Symons said Seegobin’s judgment will be challenged. He said the judge ignored the fact that many Somkhele residents had bee/n left impoverished as a result of the mine which had also impacted critical biodiversity of the area.

In his affidavit, Dladla had told the court that his family alone had lost two head of cattle, and 15 goats after the Somkhele mining operations commenced in 2006.

He said vast number of trees had been removed and rainwater stored for drinking purposes was consistently contaminated by coal dust.

Drinking water now had to be extracted from the iMfolozi River. When this river ran dry in 2016, the residents were without water for months, said Dladla. He said while Tendele went ahead and sank four to five boreholes alongside the river, these were for mining operations only.

He said blasting occurred twice a week, resulting in houses shaking and windows rattling, and cracks developing around doorframes. Several homes had even collapsed, said Dladla.

Symons said while GET’s lawyers were preparing leave to appeal against yesterday’s judgement, Tendele faced another challenge from the community. “Last week, Dladla and MCEJO filed an application in the North Gauteng High Court to review and set aside the Director-General’s decision to grant Tendele a further 222km2 to mine,” said Symons.

This article was produced for GroundUp by Roving Reporters.