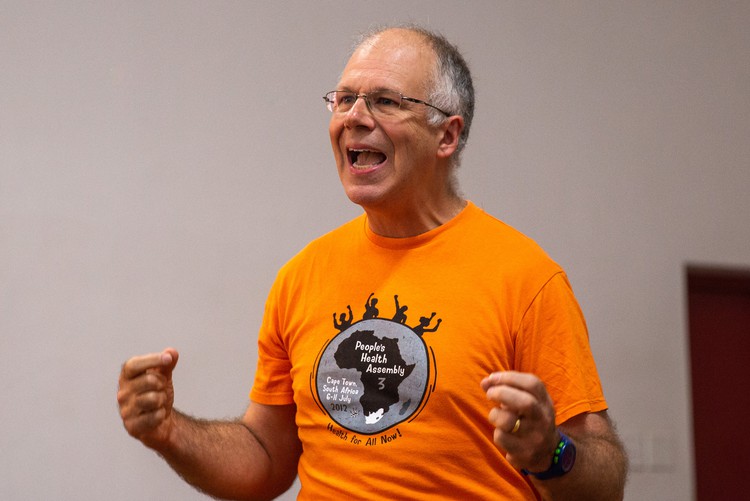 Almost 900 people signed up over the weekend to a new campaign to mobilise for a better health care system.

At a meeting on Saturday at Community House in Salt River the People’s Health Movement South Africa (PHM-SA) launched the campaign, supported by the Treatment Action Campaign and the Rural Health Advocacy Project. PHM-SA is demanding what it calls a “People’s National Health Insurance”.

National Health Insurance (NHI) is a government health policy intended to finance essential health care for all South African citizens. On 6 June Cabinet said it had approved the 2018 NHI bill to be published in the Government Gazette for public comment. The PHM-SA campaign coincides with this process. The idea behind NHI is to have a fund that South Africans contribute to, and that is then used to provide what Cabinet calls “sustained universal health access that is affordable and of high quality”. Minister of Health, Aaron Motsoaledi, is expected to brief the media on the details of the bill this week.

A worrying report by the Office of Health Standard Compliance, was released on 5 June. It inspected 696 health facilities. Of these 172 were “critically” non-compliant with standards, and 240 had serious concerns: that is, nearly 60% of the facilities inspected were in poor shape.

The Treatment Action Campaign (TAC) released a study in November 2017 that monitored 254 health facilities across the country. The TAC claimed that “less than half of facilities were considered to have sufficient staff” and in 34% of the facilities, patients waited for over two hours to be served.

“Health is a fundamental human right” said PHM-SA’s Tinashe Njanje to the hundred or so activists at the Community House meeting on Saturday. “For us to have a better health system, we need to unite. So as the PHM, we are calling for unity and a collective voice to fight for a better health system.”

A PHM-SA pamphlet described the health system as “dysfunctional, fragmented and deeply inequitable”.

The PHM-SA campaign will be using Bavuse!, a cellular communication tool, to help activists mobilise. The platform will work on the most basic cell phones and won’t cost any airtime or data to use. Once signed up, people will be able to join discussion groups, run polls, sign petitions and organise.

What we are trying to do is “increase people’s voices” said Peter Benjamin, Deputy secretary of PHM-SA and Executive Director of HealthEnabled.

The cell phone campaign was launched through Bavuse! on Friday. By Monday morning, almost 900 people had signed up for the People’s NHI campaign.

Over the next few months, PHM-SA aims to find out from people across South Africa about their health situation. The South African branch of PHM was established in 2003. The organisation campaigns for better health equity. Globally, the PHM is active in over 70 countries.