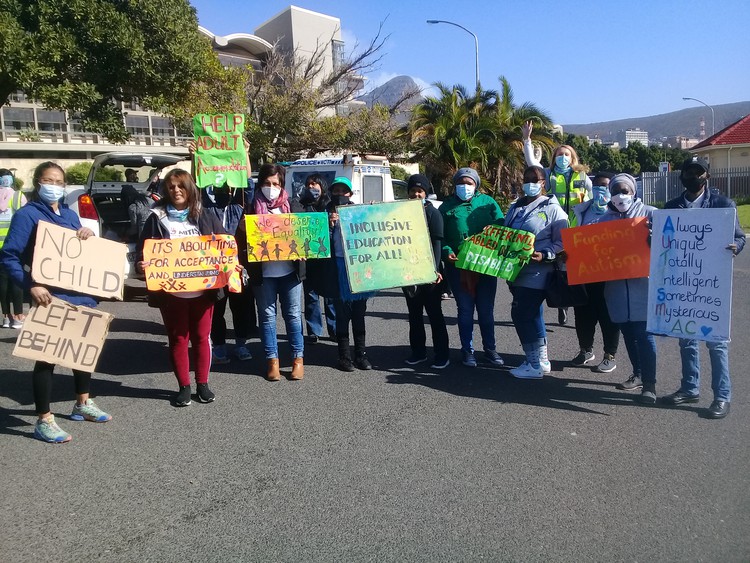 Some of the parents, caregivers and volunteers who marched from Hanover Street to Parliament in Cape Town on Friday, calling on the government to improve basic services for people diagnosed with Autism Spectrum Disorder and their families. Photo: Marecia Damons

“Parents are so heartbroken because they don’t know what to tell their children when they ask, ‘why can’t I go to school?’” says Faith Jones, a Community development worker at Autism Western Cape.

Jones currently does home-based programmes, offering support to families and children living with autism. She said there are too few schools with the capacity to cater for autistic learners, resulting in long waiting lists and many children stuck at home.

“I’ve worked with an 11-years-old who had never even seen a school because there was no placement. Children are being assessed, but are still waiting for placement. Parents are giving up their jobs despite not being able to afford it, but who else is going to look after their children?” asked Jones.

On Friday, Jones joined more than 50 parents, caregivers and volunteers who marched Hanover Street to Parliament in Cape Town. They want the government to improve basic services for people diagnosed with Autism Spectrum Disorder (ASD) and their families.

The group’s memorandum was handed to the Department of Social Development’s Jessica Longwe who accepted it on behalf of Minister Lindiwe Zulu.

Celeste Esau said, “Autistic adults in particular are falling through the cracks. Yes, it’s fantastic to help the education system, but it’s also necessary to help the health professionals. It took me over 30 years to be diagnosed and it was a real struggle.

“We also want to increase awareness that autism doesn’t stop when you’re 18-years-old. It isn’t a disease that needs to be cured, it isn’t an intellectual disability where we cannot think properly, and it isn’t a mental health issue because of how we act. We’re just different,” she said.

Thando Sabesho, whose 11-year-old daughter has autism, also joined the march. She said, “We need to be talking more about autism diagnosis, support, funding, schools, education and equality for people living with autism and their families.”