Tafelberg site should be used for affordable housing, not a private school, they argue 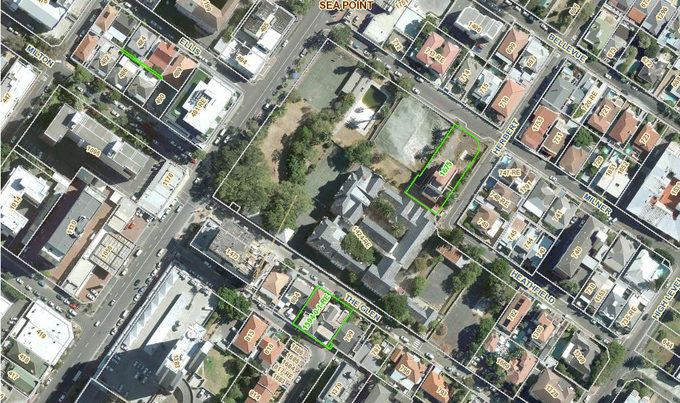 Tafelberg School (area with trees roughly in the centre of the photo) in Sea Point has been sold to a private owner. Housing activists want to stop the transfer from taking place, and rather have the land used for affordable housing. Photo: City of Cape Town website

By Naib Mian and Stephanie Kelly

The provincial government is being taken to court to halt the controversial sale of the Tafelberg School site. The applicants in the case include Reclaim the City, which campaigns for affordable housing, trustees of the organisation Ndifuna Ukwazi, former and current residents of Sea Point and a resident of Khayelitsha.

The applicants filed papers earlier today in the Western Cape High Court. They have asked for the case to be heard urgently.

The applicants have asked the court to interdict (stop) the transfer of the property to the new owners (pending a final court application), and to compel the MEC for Transport and Public Works to provide written reasons within 30 days for the decision to sell the Tafelberg property.

Government department wanted to use land for housing

Malcolm McCarthy, the General Manager of the National Association of Social Housing Organisations, has written an affidavit for the applicants.

Attached to his affidavit is a March 2013 letter from the head of the Western Cape Department of Human Settlements to the provincial Transport and Public Works department, which is responsible for the Tafelberg property.

Despite this request, Public Works advertised the site for sale to private investors in December 2015. The property was sold to Phyllis Jowell Jewish Day School.

McCarthy, who was involved in discussions about the Tafelberg property between 2011 and 2013, wrote, “To the best of my knowledge, [Public Works] did not at any point engage [Human Settlements] in a serious discussion about how Tafelberg … could be used for Social Housing.”

He also wrote, “The outright sale of such a valuable piece of land severely restricts the ability of the Province to control the current and future use of the site for social development purposes.”

McCarthy told GroundUp that he did not know why the province would choose to sell the property to a private school.

He said this perpetuated the lack of affordable housing in the area and excluded low- and moderate-income residents from educational opportunities because they might not be able to afford private education.

The court papers tell the story of Thozama Angela Adonisi, one of the applicants. Adonisi began working as a part-time domestic worker in Sea Point at 18.

After leaving Sea Point in 1994, Adonisi moved back in 1998 with her ten-year-old son. Seven others, including children, lived in a two-bedroom apartment which she rented from another tenant. Three years after she moved in, she was evicted when the tenant failed to pay the landlord the monthly rent.

“The full circumstances surrounding the eviction are not clear to me,” she said in the affidavit.

Since then, she has been living in “maid’s quarters”. She currently lives in the basement of an apartment block in Sea Point with her 13-year-old daughter, a grade eight learner at Sea Point High School. She shares a shower with about 15 others.

“The current, hostel-like conditions in which I live are dark, cramped and highly undesirable. We do, however, enjoy the considerable advantage of living in central Cape Town, close to my work and my daughter’s school,” she said.

Although she has applied for government subsidised housing, she has been on “some form of a ‘waiting list’” for 22 years. She has lived and worked in Sea Point for 32 years and said she had met many working class residents who faced similar circumstances.

“The sale of state owned land in central Cape Town, which could quite feasibly be used for affordable housing, impacts directly on my constitutional rights to have access to adequate housing and to gain access to land on an equitable basis,” she said.

Neither Public Works nor Human Settlements had responded to requests for comment by the time of publication.