A petition signed by 50,000 people opposing the R4.5bn mega-development has been handed over to Mayor Dan Plato 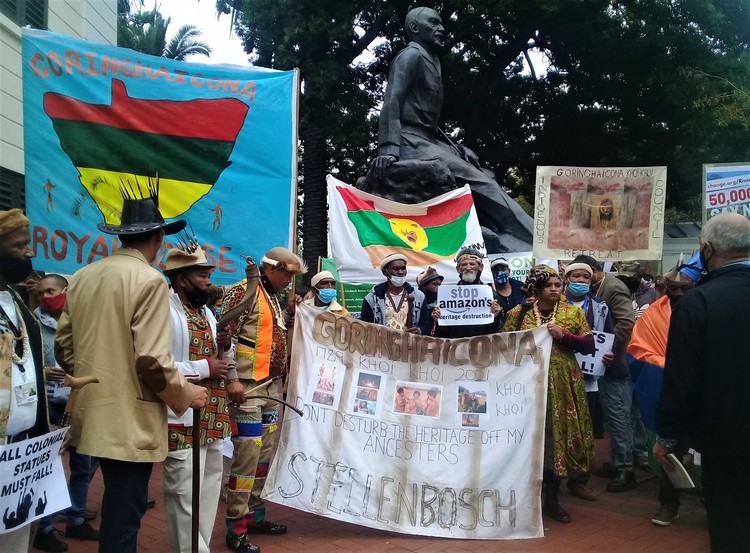 About 100 people marched through Cape Town city centre to deliver a petition with 50,000 signatures objecting to the proposed Amazon development at the Two Rivers Urban Park. Photo: Marecia Damons

More than 100 activists and organisations joined the “Walk of Resistance” through Cape Town’s city centre on Wednesday.

The group handed over a petition with over 50,000 signatories objecting to the proposed Amazon development at the Two Rivers Urban Park. Some people regard the land as South Africa’s first site of colonial dispossession by the Dutch, where they forced the Khoi from their ancestral grazing lands.

In September 2020, the City of Cape Town’s Municipal Planning Tribunal gave the go-ahead for the rezoning of the River Club property in Observatory to allow a R4.5bn mega-development which would include headquarters for Amazon.

Development on the site, owned by Liesbeek Leisure Properties Trust, has been met with ongoing opposition from civil society, activist organisations and members of the public, since the trust submitted a notice of intent to develop in 2016.

On Wednesday, people affiliated to the Salt River Heritage Society (SRHS), Observatory Civic Association (OCA), Bo-Kaap Civic and Residents Association, and multiple First Nation groups, marched from the Bo-Kaap Museum to the Iziko Slave Lodge Museum and then towards the Jan van Riebeeck statue along Adderley Street while holding up posters which read: ‘Stop Amazon’s greed’, ‘50 000 Say No’ and ‘Stop Amazon’s Heritage destruction’.

The groups are calling on the national government to protect Khoi and San heritage sites; to remove colonial statues, for a Khoi and San Truth and Reconciliation Commission; and to introduce the Khoekhoegowab language at Western Cape schools as a national language.

Observatory Civic Association chairperson Prof Leslie London said that allowing private developers to build “inappropriate” and “overly dense” development on a floodplain sacred to the Khoi and of high ecological sensitivity, is an insult to First Nation communities.

“We want Amazon and other corporates to realise that they need to think about their legacy if they join in the destruction of the environment, the demeaning of indigenous heritage, and the debilitation of our climate change resilience,” said London.

Lutfi Omar of the Salt River Heritage Society said that by objecting to the proposed development, they are also rejecting the apartheid spatial plan that allows for ongoing segregation in the city. “Through this walk and the many others we have planned, we hope to foster alliances and solidarity in collective action,” he said.

Tauriq Jenkins, High Commissioner of the Goringhaicona Khoi Khoin Indigenous Traditional Council (GKKITC), said they are also demanding that all sacred human remains that were unethically acquired and exported be repatriated.

In addition to the development, Jenkins said they are calling on the national government to investigate the City’s treatment of homeless people and the deployment of Law Enforcement against poor working class communities in the Western Cape.

The petitions were received by Ward 58 Councillor Matthew Kempthorne on behalf of the City and mayor Dan Plato. The City did not respond to requests for comment by the time of publication.