Academics and the Fallist movement

The Fallist demands are welcome, but academics who have suspended ethics and criticism hinder those very demands 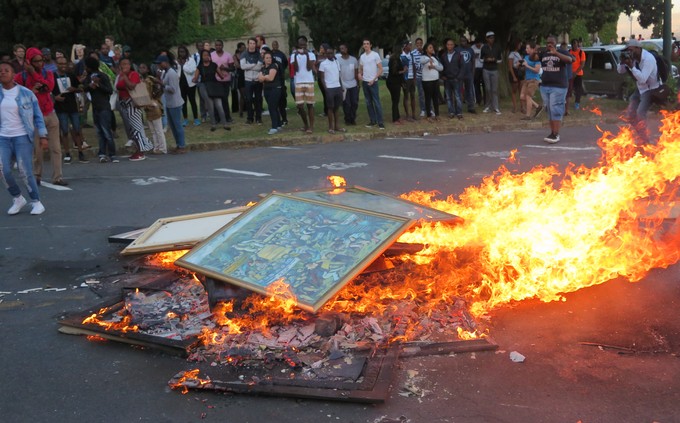 The protest action of 2016 began on the basis of two central demands: free tertiary education and quality decolonized education.

These are issues which any university worthy of its name should debate and formulate responses to so that workable solutions can be designed.

As someone who has taught for 39 years, I welcome the advent of a critical, progressive student voice. It is why I teach. Critique is the stuff of a university committed to deliberation. But that does not mean that either demand is free of difficulty.

Turning to the first demand, it is conservatively estimated that free tertiary education for all, including the colleges, would cost at least R60 billion inclusive of books and accommodation. The Fallist movement has produced a thoughtful proposal in this regard, which, unfortunately, is flawed. It suggests, for example, a 3% increase in the skills development levy which is a retrogressive measure as it falls upon workers ultimately to shoulder this burden. Likewise, the proposed apartheid tax while important to implement, raises huge uncertainties as to the amount to be collected. The reliance on the CIEX report to claim that R26 billion is recoverable is a guestimate as a careful read of this report shows it is very short on specifics. A wealth tax is also unlikely to produce anywhere near the claim of R10 billion a year. In short, the proposal is not a reliable progressive way to raise the revenue annually, even though both seeking to find the apartheid dividend and a wealth tax are important initiatives.

One must remember that debt already costs the country R147 billion a year; that is 12 cents in every rand collected in tax. It is important to keep debt under control as the greater the interest burden, the less public revenue is available for social goods. In short, to collect R60 billion a year is a huge undertaking. And even if we could, how then do we then raise an additional R70 billion to provide people with decent health-care or the additional billions for pre-primary education?

While section 29 of the Constitution envisages that the state progressively realises the right to further education, it cannot be done in 2017. What needs to be done is to progressively realise the right by rendering it accessible to an increasing range of those who cannot afford higher education. Those ersatz economists, who eschew any economic modelling to justify extravagant proceeds from additional tax are not doing anyone a favour. It is precisely this disregard for any economic evidence that promotes the rejection of what has been a huge victory for the Fallist movement; an additional R17 billion added to the tertiary education budget. What is now required is a coherent plan by government to ensure the further realisation of the right contained in section 29 in a sustainable manner.

On decolonisation, there is an imperative to engage as to how tertiary institutions respond to locality and context. In some areas of study this will mean radical change. Once the debate is grounded in concrete steps, curriculum change should follow expeditiously. It is also vital that a South African university should focus graduates on careers that promote inclusive development of this country rather than graduates for export.

Hence both demands have weight and should form the basis of a progressive politics grounded in clear mechanisms to achieve these objectives. Sadly, this focus has been lost under a different type of protest action.

Disruption for its own sake with some inchoate aim of undefined revolutionary change does not constitute any form of progressive politics. How much more so where violence and intimidation are the central aims for political organisation, where mandates are deemed irrelevant, democracy is rejected and where the worst kind of identity politics mixed with half-digested Fanon is used to promote race hatred such as “kill all whites”, “Fuck the Jews”, and “Hitler was a great leader”.

In some ways this form of identity politics is regressive; it is disinterested in how to respond in a radical way to the challenges of globalisation save to hearken back to a form of nostalgia which is not even historically grounded. It retreats into a particularly dangerous area when the concept of humanity is rejected, such as that science belongs to all humanity. The idea that we must reject science as a Western construct takes us back to the Aids denialist era of garlic and potatoes rather than antiretrovirals. Perhaps if we all threw away our cell phones and eschewed Twitter and Facebook we would live more profound lives but that is hardly likely to happen even from the anti-science groups.

Seeing forms of knowledge as belonging to all humanity is not incongruent with a commitment to purge racism from discourse or social, economic and political practice. To the contrary, that is the challenge, particularly how the global discourse can be shaped to promote developing countries as opposed to reinforcing growing inequality.

Similarly, the demand that the rich do not pay fees is not progressive politics. Nor is it it progressive to reject engagement.

Hence while progressive academics no matter their particular politics should join students in respect of the two core demands, the politics of the disrupters should be seen for what it is – at best populism which has its racist doppelgänger in Trump voters. Some of our academic colleagues seem to refuse to accept this distinction. They justify any action by students even when workers, who happen to be security guards, are badly beaten. Violence, intimidation, hate speech are met with silence.

Of course, the police have been excessive, yet I look in vain for the public comment from some of these voluble academics when Marikana happened. True, a university cannot be policed as many of us know from our experience of apartheid. But what is supposed to be done when a major weapon is violence and intimidation? Hence, can it not be asked: who caused the militarisation of campuses in the first place?

It is astounding how these so-called revolutionaries in academic life refuse to accept that there are a small group of disrupters who are bent on violence, whether it be carrying of rocks, sticks, burning of cars, art etc. Read the Supreme Court of Appeal judgment in Hotz and others vs University of Cape Town where the violence and destruction of art took place when there were no police on campus. That violence had nothing to do with security. What other than naked populism or opportunism explains how we have medical doctors who sanction, at least by implication, violence?

In the humanities we now are paying the price for the heavy overdose of postmodernism that passes for radical critique. Significantly it is Fanon that these academics read for justification. Perhaps they should read Fanon’s condemnation of the very antithesis of the colonialist that many of them are – a new form of predatory elite. It is also ironic that some of the academics who tolerate violence continue to teach absent any changes to their curricula, which is an even more frustrating example of a new politics of expediency.

I too want no police or security when I teach but then we need to get back to the politics of the two key demands and an organised form of politics that focuses thereon. In the context of 2015/16, we need to ask what do we mean by politics that truly effects change which is both radical and sustained.

In the final analysis, students have raised key questions and we must embrace the principles arising from these events. So it is not even those students who have embraced disruption per se that concern me. Rather, it is a group of academics who will have destroyed the opportunities to give millions who deserve, as a right, the very best of tertiary education, purged of its excessive Eurocentric bias that should be the true focus of concern. With their suspension of the ethical and critical it is they who will have destroyed far better than they could ever have contemplated.

Davis is a High Court judge who teaches law at the University of Cape Town. He is also the chairperson of the The Davis Tax Committee.

A response to this article has been published.