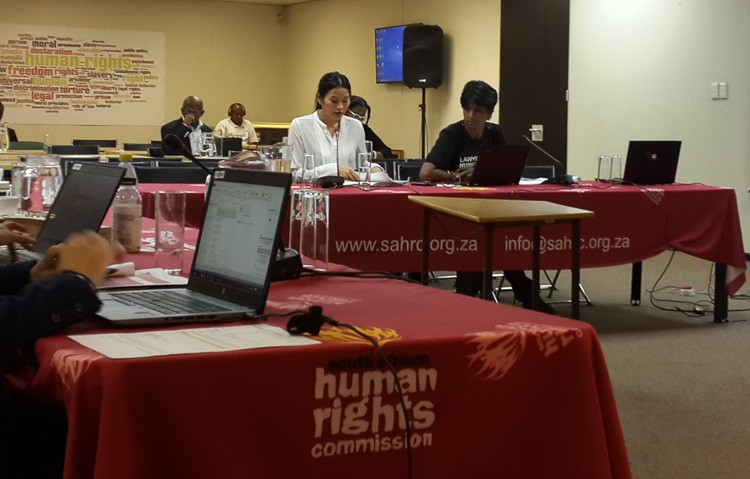 About 96% of refugee applications are rejected according to Lawyers for Human Rights, which has described the Department of Home Affairs as “institutionally xenophobic”.

“Two years back, we have a 96% rejection rate overall in this country,” said Ekambaram.

The two-day hearing was set up by the SAHRC to understand the causes and effects of xenophobia on South Africans and immigrants. Submissions were made by LHR, the Foundation for Human Rights, African Diaspora Forum, Hate Crimes Working Group, Southern Africa Litigation Centre, as well as the Department of Education.

Leung said immigrants were often denied access to basic health care, education and public services based on the public servant’s prejudice against immigrants. She made an example of a case where LHR was assisting an unaccompanied foreign minor. LHR took the minor to a consultation with a social worker at the Department of Social Development.

“The minor came out of the consultation visibly disturbed. It turns out that the social worker lashed out at him saying that he was lying about his age, lying that he didn’t have family here and saying he was just here to abuse South Africa’s services and resources,” she said.

Leung said there was also corruption at all stages of the application process. She said LHR had conducted a survey which showed that one third of the participants experienced corruption at the refugee offices.

Commissioner Angie Makwetla, one of the panel members, asked the LHR what steps the State and SAHRC should take to curb corruption at the refugee offices.

“There is always a call for evidence. We have been working with the Hawks to find a way to get the evidence that is needed… because when we report it to the Department, there is always denial. There needs to be an oversight and monitoring system,” answered Ekambaram.

Laura Freeman, another panel member, asked the LHR to expand on their efforts to work with Home Affairs and whether they have been successful or not.

Leung said LHR had worked well with Home Affairs for years because many of the public servants were former activists. But more recently, she said, the LHR had received either no responses or inadequate responses from Home Affairs, which often forced it to take legal action.

“As an attorney, I would rather just resolve the issue over the phone or via email and not go to litigation with every case. It’s a drain on state resources and it’s a waste of time because people only see results after a year or so,” Leung said in her closing statement.

Panel member Commissioner Chris Nissen thanked LHR for its submission and promised to take its suggestions into consideration.

The hearing continues on Thursday morning.