Mathabo Mofokeng could not access her pension without her ID 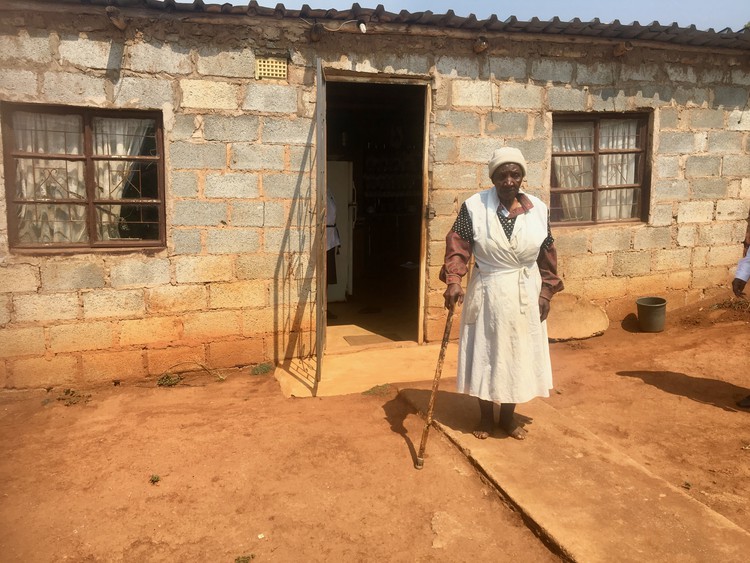 Mathabo Mofokeng, 86, lost her ID and SASSA card. When she went to Home Affairs to get a new ID, an official told her “to go back to Lesotho”. She is South African and says she has lived in KwaZulu-Natal since she was 18. After GroundUp asked questions, she was issued a temporary ID. Photo: Nompendulo Ngubane

An 86-year-old woman did not have access to her pension for three months because she lost her ID document and SASSA card and could not get new ones. When she went to the Home Affairs office in Church Street, Pietermaritzburg, an official told her “to go back to Lesotho”.

Mathabo Mofokeng from Nhlazatshe had to survive on food donations from the women at her church. She lives alone and she can’t hear properly.

Originally from Matatiele, not Lesotho, Mofokeng said she has lived in KwaZulu-Natal since she was 18.

“All I want is my ID document. I don’t know how I lost it. I have searched for it in the house. I can’t find it. I don’t even have money to ask someone to accompany me to the offices again. I can’t go alone,” the distressed gogo told GroundUp a week ago.

“I’m scared to go back to Home Affairs offices. An official told me she can’t issue me a new ID; I should go back to Lesotho,” said Mofokeng. “There was a time I went three days without food.”

Last week, GroundUp contacted Home Affairs provincial manager Cyril Mncwabe, who said he would assist. “We will also check the matter of her ID not being issued.”

On Friday, Mofokeng was issued with a temporary ID. But that is not the end of her troubles.

“I have people breaking into my home … People know I stay alone. I have become a victim and dependent on neighbours,” said Mofokeng.

Bongi Mbatha from St Martin’s Anglican Church in Edendale said Mofokeng’s electricity had been cut off. “There have been break-ins at her home. She is old now … Sometimes she tries to cook and burns the food … She sometimes forgets and she has hearing difficulties. The toilet she uses is not in a good state. She may fall inside at anytime. The church built the toilet but it’s not enough,” said Mbatha.

Social Development spokesperson Ncumisa Ndelu said the department would send a social worker. “Based on the outcome of the assessment she will be placed in a residential facility,” said Ndelu.