Family spends night on the street 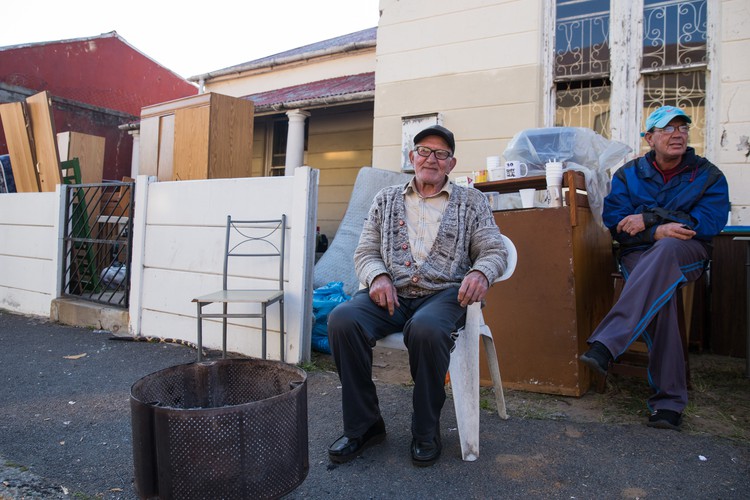 Kenneth Blaine (80, left) and his son Alain spent the night on the street after they were evicted from their home on 29 Plein Street Woodstock on Monday. Photo: Ashraf Hendricks

A Woodstock family is homeless after they were evicted on Monday morning — without warning they say. They spent the night on the street.

The circumstances leading to the eviction remain unclear. GroundUp has been trying unsuccessfully to get comment from the City of Cape Town since Monday afternoon.

Kenneth Blaine, who is 80 years old, claimed the house’s deed was in his deceased mother’s name and that he has been trying to take ownership of the property since 1981.

Blaine has lived in the Plein Street house for 43 years. He says that his son’s family moved in with him after the death of his wife in 2012.

There is an update to this story here.

“I’ve been battling with the City for decades,” he said, standing outside the home among a pile of his family’s possessions.

Blaine is recovering from foot surgery, which makes it difficult for him to walk or stand. His son, Alain, is also recovering, from a motorcycle accident earlier this month.

“We’ve got no idea what we’re going to do tonight,” said Alain Blaine on Monday afternoon. “The shelters say they’re full. We’ve got the stuff to worry about. We’re going to have to sell it all.” In the end they slept on the street. Members of housing activist group Reclaim the City kept them company.

Kenneth Blaine said that a sheriff arrived with two men just after 10am on Monday and showed him a court order for his eviction. They proceeded to move the family’s belongings from the house and into the street.

Representatives from Reclaim the City were the first to respond to the eviction. They helped the Blaines move their belongings from the street and organised them in the front garden.

“When we got there [on Monday] morning, there was furniture and books and things just thrown onto the road,” said Ashura Easton, who works with Reclaim the City.

The property is due to be auctioned at 12pm on Tuesday.

Easton said a person claiming to be from the sheriff’s office warned the family last week of the pending eviction. But despite this, the Blaine family appears to have been taken by surprise.

Kenneth Blaine said that previous evictions in the neighbourhood had come with warnings, but not this one. “We were completely surprised. No warning, nothing.”

GroundUp is continuing to try to get the City’s version of events.