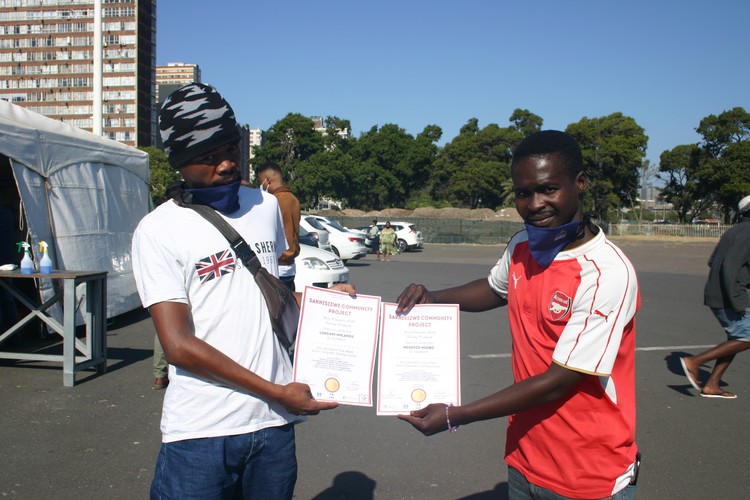 “Sometimes you go to bed without anything to eat, but you have to keep strong,” says 29-year-old Lungani Mhlangu. He has been living on the streets of Durban since 2014 after leaving his home in Mtwalume, Port Shepstone.

On Wednesday, Mhlangu was one of 55 homeless people who completed a Basic Computer Skills Development training course run by NPO Sakhisizwe Community Project.

Sakhisizwe was established in 2009, initially to help communities deal with substance abuse. But in 2013, the NPO decided to extend its services to include film-making, computer labs, a music centre and other community services to empower the youth.

When government implemented lockdown in March to slow the spread of Covid-19, the City provided shelter to about 2,000 homeless people. Since then, they have benefited from several social and health programmes.

Mhlangu says he has not been able to find work since losing his ID late last year. “I was in the process of applying for a new ID when we went into lockdown. I kept myself busy with piecemeal jobs and doing everything I can to make some money,” Mhlangu says.

With the basic computing skills that he just obtained, he hopes to find a steady job so that he can send money to his family. “I would like to send money home to my sisters. For me, the course was like a revision as I did computer studies at school but I had forgotten since living on the streets for so long,” he says.

Another graduate, Thabo Sithole, from Umzinto, south of Durban, says he too is hoping the course will increase his chances of employment.

He left home in 1999 and has been living on the streets in different parts of the country including Gauteng, the Eastern Cape, Free State and now Durban. “I left home because of peer pressure. My friends and I decided to leave home and I was told not to return. I would love to go back one day and ask for forgiveness,” he says.

Ntokozo Ngcobo of the Sakhisizwe Community Project told GroundUp that their organisation was initially invited by eThekwini Municipality, in partnership with the provincial Social Development Department to give a talk to those living at the shelters.

“When we got there, we got a sense that they didn’t want just talk. We suggested to the City that we can offer this programme that can in turn help them get jobs and better their lives.”

Ngcobo says the course started at the end of April, with two classes for two hours per day. “It has not been easy as some had never even touched a computer before. When we started we didn’t know how it was going to turn out, but I am happy to say that we managed to achieve what we were hoping for and they are ready to be employed,” Ngcobo says.

A few from the group who did well and have matric, will be selected to complete the NQF (National Qualifications Framework) aligned certificate. “People can get typing jobs or work at an Internet cafe. We have put them to that level.”

Ngcobo has urged officials to consider a long-term plan for the homeless. He raised concern that many people currently in shelters will be forced back to the streets after the lockdown.