21-year-old in wheelchair just wants to go to school

Montoedi Nyangweni fell down a cliff fetching water from a river 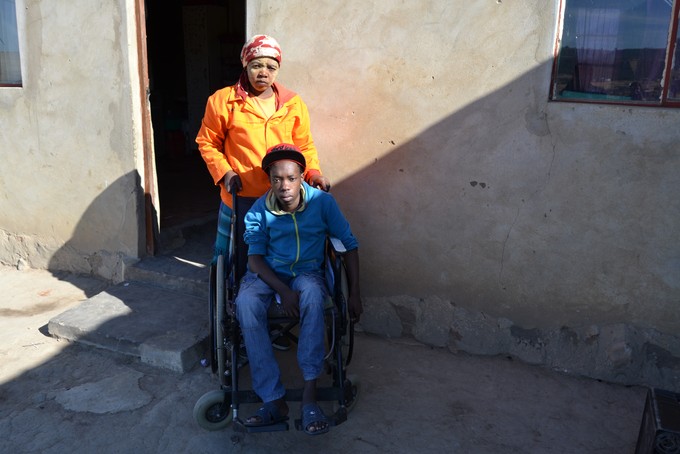 Montoedi Nyangweni was six years old when the wooden ladder he used to get down a cliff to a river to get water broke, sending him tumbling and shattering his dreams.

Nyangweni, 21, from Tshitsong Village in Matatiele in the Eastern Cape, says all he ever wanted was to become a lawyer so he could build a better home for his unemployed mother. But on that fateful day in 2007, he broke his back.

The accident left him wheelchair bound. He was in and out of school until he finally left in grade six. Now, he wishes to finish school.

The family looked into Harding Special School in KwaZulu-Natal, but the fees were too high for them.

“All I want is to go back to school. I know I can’t do law anymore. I just want to get a skill so that I can be able to generate some income and assist my mother,” says Nyangweni.

GroundUp visited the family in their three-roomed home in rural Matatiele. Nyangweni’s younger brother was at the gate, on his way to cut some wood on the cliff where his elder brother fell.

Nyangweni asked his brother to push him in his wheeelchair out of the house. “I rely on them to push me in and out,” he said smiling, as he approached us. “As you can see we are living in a rural area. The area is full of rocks,” he said.

His brother took us to the cliff where he fell. “Tlokomela! [be careful]” shouted Nyangweni as we left.

To get to the river, one has to go down a ladder made of wood, then go through bushes before one reaches a small river surrounded by big rocks. The community still uses the same ladder.

When GroundUp returned to the house, Nyangweni’s mother Nokukhuthala was back from her piece job.

“The pain in my heart when I look at him, knowing that my son was never born like that,” said Nokuthuthala.

She said that since the accident five standpipe taps had been installed, but the taps sometimes run dry and most people still go back to the river. There is no electricity and residents gather wood for fires.

“I hold my tears, thinking of the day my son fell on those cliff but there’s nothing we can do,” said the mother of four .

“He had already taken a few steps on the ladder when it broke. I think he hit his back on a rock. I was called by other kids. I had to hire a car to rush him to hospital. There were times when we would sleep on the hospital floor, waiting for doctors to help us. At the time doctors were not aware that his spinal cord was broken. They kept on sending him back home. He would complain about pain, but the doctors kept on saying he only hurt his leg. Things got worse and he could not walk any more. I was called to his school because he was struggling to walk. But still the doctors did not see anything wrong with him. Now he is staying at home doing nothing, while his friends are working,” said Nokukhuthala Nyangweni, tears running down her cheeks.

She earns R600 a month from her piece job. Her husband, who works as a security guard, earns R2,200 a month. She receives child support grants for three children and Montoedi Nyangweni gets a disabilty grant. But it is not enough to take him to school.

Nokuthuthala Nyangweni said after going in and out of hospital with doctors not knowing what was wrong with her son, her mother, a nurse at Mount Fletcher hospital outside Maclear, called her. It was only then that X-rays showed damage to his spinal cord.

The Nyangweni family said officials from the Matatiele Local Municipality had visited them and made promises to build another house suitable for his disability.

“The Department of Human Settlements is looking into the matter. The Nyangweni family will benefit then,” he said.