“A bullet missed me. I felt it passing my face” 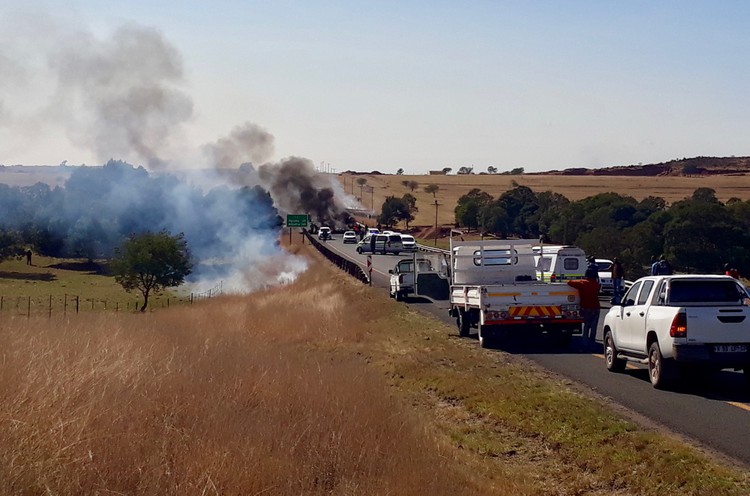 By Nombulelo Damba-Hendrik and Yamkela Ntshongwana

At least 14 taxi drivers are expected to appear in magistrates’ courts in the Eastern Cape on Thursday following taxi driver protests which turned violent in some towns.

The protest was over a range of issues. Taxi drivers marched to the ANC headquarters at Calata House in King William’s Town to hand over a memorandum of grievances to Eastern Cape ANC chairperson Oscar Mabuyane. The drivers called for the removal of Eastern Cape Transport, Safety and Liaison MEC Weziwe Tikana.

In Cofimvaba police used rubber bullets to disperse angry taxi drivers who had closed the busy R61 outside the town with rocks and burning tyres at 6am. Protesting taxi drivers fired back at police. A taxi driver said that the three shots that were fired were “just a warning” to the police.

The protesters forced all shops in Covimvaba to close. Only petrol stations were allowed to stay open. An employee at a hardware shop said a group of taxi drivers barged into the shop and forced them to close. Eyewitnesses also told GroundUp that they saw taxi drivers force the local Spar Supermarket to close.

Anele Cekiso, who was travelling with his brother from Queenstown to Mthatha, said taxi drivers tried to attack their car, forcing them to turn back to Cofimvaba town.

“They stopped in front of us and forced us to turn back to Cofimvaba. They also forced a big truck coming towards Cofimvaba from the Ngcobo side to block the road,” he said.

“When they [taxi drivers] shot back at the police, I was here. A bullet missed me. I felt it passing my face,” said Cekiso.