Elections 2021: Mogale City in the dumps 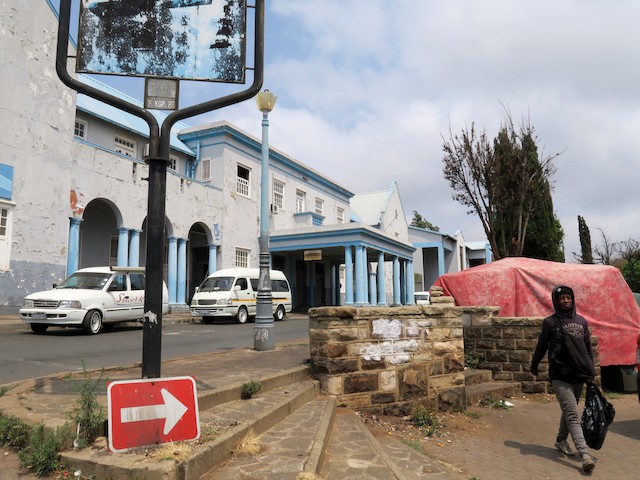 The once grand Krugersdorp train station, although a national monument, is derelict. The station is not Krugersdorp’s Mogale Local City Municipality’s responsibility, but the state of the city centre is hardly better. All photos: Steve Kretzmann

Backed by an old gold mining dump, the Krugersdorp train station with its Neo-Dutch Renaissance gable looks over the town from its slightly elevated position. The last remaining station built by the Nederlansche Zuid-Afrikaansche Spoorweg-Maatschappij (NZASM) at the end of the 19th Century, it is tattered and abandoned. Once a colonial facility for white commerce during the gold rush, today it serves no one. The trains no longer run, and the station parking lot is now an informal taxi rank.

While the maintenance and management of the station and rail line is the responsibility of the Passenger Rail Agency of South Africa (PRASA), not the municipality, its dereliction is in character with the streets and buildings of the town it overlooks.

Beneath a faded red awning a dozen working-age men drink quarts of Black Label beer and play morabaraba. It is 11am.

The eldest of the group expresses dissatisfaction with the state of Mogale City, especially the lack of jobs. A younger man, dressed in orange overalls, says he is the ANC candidate for ward 24, which forms part of Munsieville township, but he won’t give his name. Asked why there is not a single ANC election poster on display though elections are weeks away, he says it is “strategic”, but his explanation of the strategy is incoherent.

A trader selling cooked meat on the pavement says she is frustrated with empty promises and lack of service delivery under the Mogale City Local Municipality and won’t vote for the ANC on 1 November. 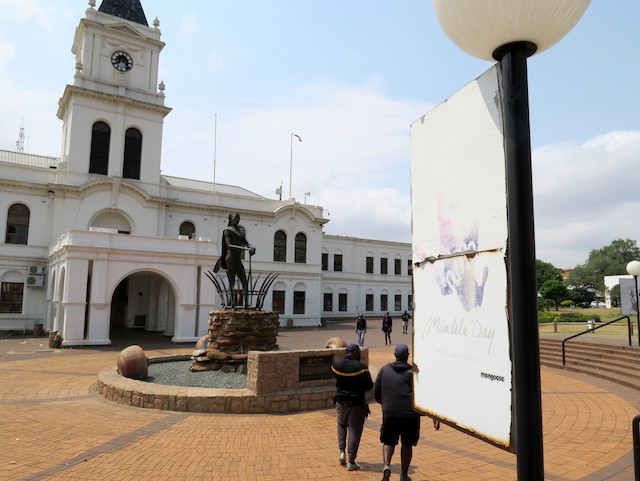 Built during the Witwatersrand gold rush, Krugersdorp has many grand early 20th century buildings, but the town centre shows signs of economic depression.

A few blocks away is another tattered architectural gem – the Art Deco Mogale fire station built in 1930. The interior of the building is in disrepair, with ceiling boards falling down. Some of the firefighters on duty, who spoke anonymously, said the tyres on the fire engines are so worn they worry they will have a blowout. The sirens don’t work, and the last time the firefighters received new uniforms was in 2014. They are short-staffed, but unpaid volunteers are being used to make up for vacancies.

The fire station is managed by the ANC-led West Rand District Municipality. A firefighter says when the DA ran Mogale City for a brief period in coalition with the EFF following the 2016 local elections, the council promised to take it under their wing. Once the EFF switched to side with the ANC a year later, the commitment fell away.

The adjacent Bob van Reenen sports stadium is Mogale City municipality’s responsibility. It is falling apart. The Krugersdorp News reports that the stadium has “been in ruins for years”, and AfriForum has proposed that its company, Pionier, take it off Mogale City’s hands and restore it.

AfriForum Krugersdorp chairperson Martin Lombard said that after they approached the municipality in March, the Council, on 27 October, agreed to hand the stadium to Afriforum to refurbish. Lombard said fixing the stadium would cost R25 to R30 million and would need six to eight months of work. He said the track needed to be replaced, the grass rugby and soccer fields needed to be re-established, and all the water and electrical infrastructure needed to be replaced as it had been ripped out by looters.

Youth from nearby Munsieville, who currently have no access to proper sports facilities, would also be able to play soccer at the stadium. 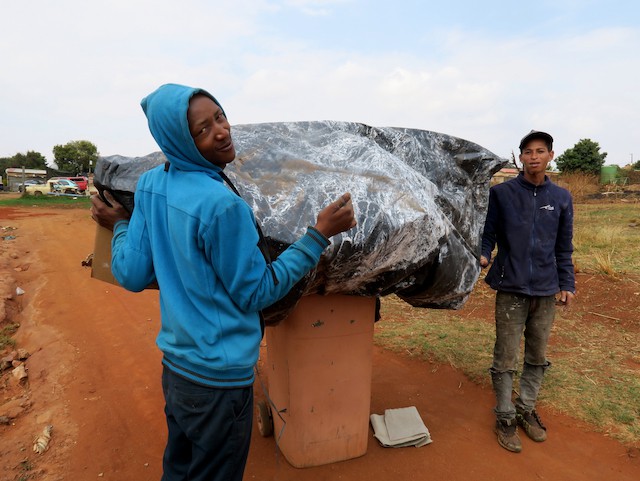 Kago Molefe (left) and Shadrak Fillis collect recyclable material from an illegal dumpsite on the edge of Munsieville township in Mogale City. Molefe, who says he graduated from technical school two years ago, says there are no jobs in the area.

When the 2011 census was done, the employment rate reported was 52%. The lack of options and opportunities for young people in the area is underscored by 21-year-old Kago Molefe who survives by collecting scrap and recyclable material illegally dumped on the edges of Munsieville township.

He and his friend Shadrak Fillis wheel their haul up a street soiled with raw sewage spilling from broken infrastructure.

Molefe says he graduated from Boitsenapa Technical Secondary School in Mahikeng. The money he makes from picking through dumpsites pays for bread and cigarettes. He lives with his sister and brother, both unemployed. He said the main thing people want is employment.

“There’s no work here,” says Molefe. He said that when there are government-sponsored employment programmes, the people who get hired are friends or family of local political leaders.

While he and his siblings live in a state-subsidised house owned by his divorced parents, they rarely have enough money to buy electricity, although they have water.

He was unsure about who to vote for. “There are too many empty promises. Maybe I’ll choose some party other than the ANC.” 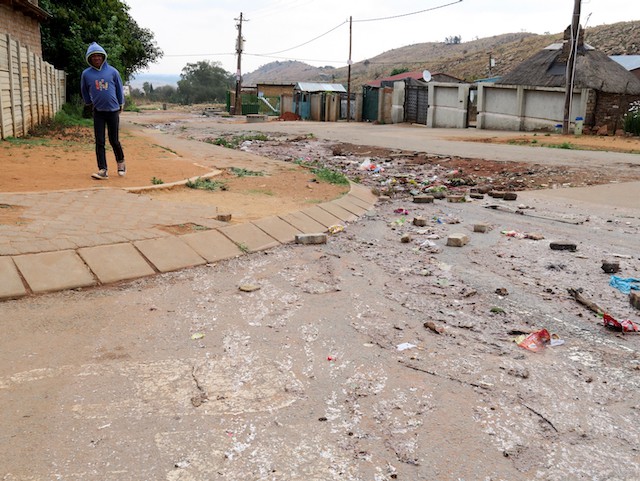 A child walks along a street in Munsieville marked by a recent sewage spillage.

Like most of South Africa’s municipalities, Mogale City is polluting its rivers and streams with untreated or partially treated sewage. The municipality is supposed to provide monthly effluent quality results to the national Department of Water and Sanitation, but the national department’s database revealed no results for any of the four sewage treatment plants within the municipality. The level of compliance for all indicators was therefore 0% throughout 2020.

In spite of a R361-million debt to Eskom, in spite of sewage leaks and water cuts, and in spite of the state of facilities such as the sports stadium, Mogale City has obtained unqualified audits from the auditor-general’s office from at least 2015/16 to 2018/19. The 2019/20 audit report is not yet available on the National Treasury’s website.

The unqualified audits came with findings, however, and the auditor-general’s office notes that in the 2018/19 financial year there was R166 million in unauthorised expenditure, mostly due to non-cash related transactions. Irregular expenditure amounted to R221 million, mostly caused by non-compliance with supply chain management regulations. This is a red flag for corrupt deals.

Unauthorised, irregular, fruitless and wasteful expenditure amounted to 13.8% of that year’s total budget.

In the 2018/19 year the municipality had a R60.7 million cash balance, but this was enough to cover only ten days’ worth of expenses. Ideally, it should have at least three months cash coverage. 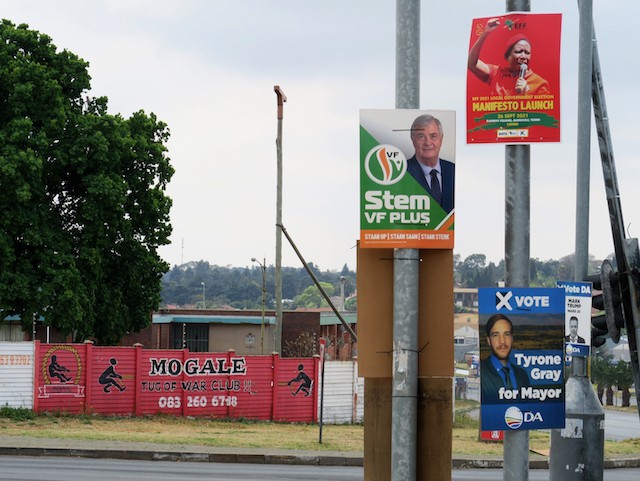 At the beginning of October, with a month to go before elections, no ANC posters were visible in Krugersdorp.

The coalition did not last. DA Mayor Michael Holenstein, who had replaced Lynn Pannall following her resignation due to ill health, did not survive a motion of no confidence brought in 2017, as the EFF stood behind the ANC.

Patrick Lipudi took Holenstein’s place until his death on 12 January 2020. The ANC’s Francis Makgatho was then elected into office on 28 February last year at a special council meeting which was reportedly determined quorate even though the DA, EFF, and FF+, who together make up half the council, did not attend.

If the ANC continues to lose support, the DA may obtain the most votes on 1 November, but unless it manages to increase its support with 15% more of the vote, Mogale City is likely to face another five years of unstable coalition governance with the EFF as kingmaker. 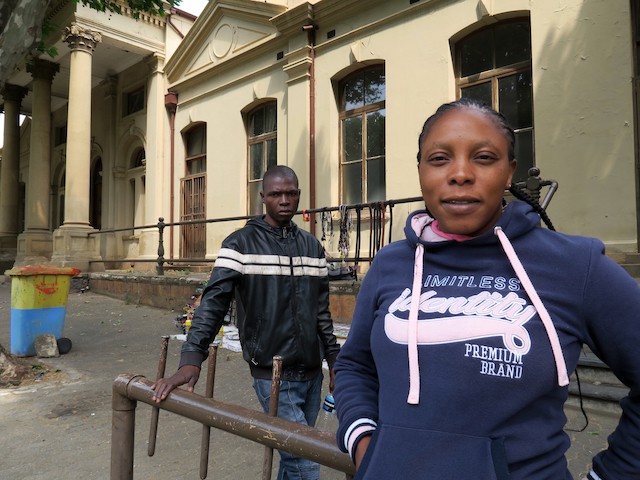 Wanyekile Matiwane and her partner Holicio Marumete who is from Mozambique, make a living selling CDs, loose cigarettes and other items on the street in Krugersdorp. Matiwane says they are often harassed by law enforcement officers and their goods are confiscated, but they continue because there are no jobs available. Hailing from Butterworth in the Eastern Cape, she says she will still vote ANC in honour of Nelson Mandela.

Next:  Give us better cops, say Mitchells Plain protesters

Previous:  Elections 2021: where are the promises to our children?