At times “the queues look like a SASSA line” 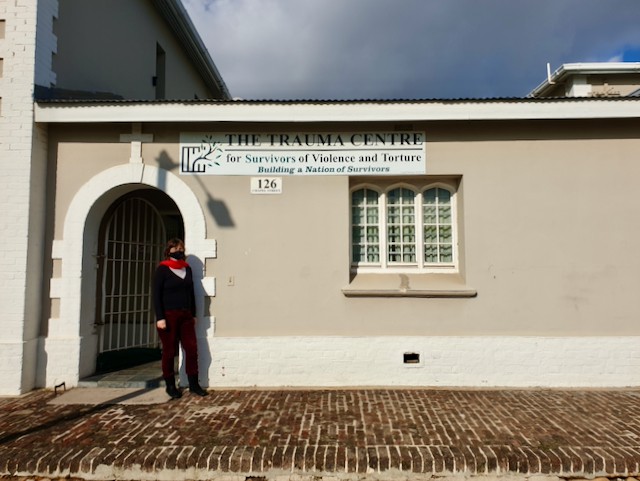 Executive director Marguerite Holtzhausen outside the Trauma Centre for Survivors of Violence and Torture in Woodstock. The centre sees an overwhelming number of people. Photo: Mary-Anne Gontsana

The Trauma Centre for Survivors of Violence and Torture is overwhelmed by cases, says Marguerite Holtzhausen, its executive director.

“Domestic violence and gender based violence in communities is so massive. One of our busiest offices is in Delft. Our teams start at 8am and sometimes will work through their lunch time because of the long queues of people who come for counselling or support. Some of the social workers have said at times the queues look like a SASSA line,” says Holtzhausen.

Most of the time the centre’s social workers face ten clients a day whereas they should be counselling only five a day.

“Our children team is overwhelmed because they only have two social workers. For adults we have five,” says Holtzhausen.

“We’ve had situations where children have been through terrible things. There was one case where after we told the parent that their child was sexually abused, their response was ‘I am so relieved, I thought it was something worse’,” says Holtzhausen. “Murder and rape have become normalised in the communities.”

The trauma centre is based in Woodstock, but it has outreach offices in Delft, Kraaifontein, Manenberg, Bishop Lavis, Bonteheuwel, Langa and elsewhere.

The offices are usually located near to a police station.

“The staff come to me and tell me that they are overwhelmed because they’ve got too many cases. Generally, the most cases we receive are from trauma due to rape, especially gang rape and domestic violence,” says Holtzhausen.

Yumna Adams has been working at the trauma centre for a year. She specialises in trauma cases dealing with children as young as five. She graduated in 1995 and worked as a statutory social worker. “This is my first non-statutory job – which has allowed me more creativity and a little more autonomy,” she says.

“We also get a lot of referrals from the Red Cross Hospital and the Department of Social Development,” says Adams.

“Delft and Kraaifontein have a lot of sexual abuse cases. I actually started to feel so traumatised by the numbers. The level of trauma the children and young people are experiencing in these areas is too much. I have also started suffering from secondhand trauma because of these cases,” she says.

The centre also does work in schools. “We run group sessions at schools and if there are any individual cases that come out of that, then we organise individual sessions,” says Adams.

Holtzhausen says one of the challenges was that police stations are not “victim friendly”. Delft has a special room but it is cold, dirty and unwelcoming.

“Some of our other offices we share with police officers, so sometimes it’s not confidential; there’s no privacy. So one of the things that is on our wish list is to upgrade these spaces – some paint, better furniture, curtains, you know, basic stuff,” says Holtzhausen.

The trauma centre has a treatment plan of six counselling sessions, but “on average people will attend two or three sessions” only, she says.

“We need caring communities. When people have gone through a traumatic experience, for example rape, you will find that the victim is shamed in the community or that the perpetrator is still free in the streets,” says Holtzhausen. “We need to stop judging and start supporting each other.”

Half of the team working in the field caught Covid-19. “But we are thankful that no one passed on. We were very lucky. We supported each other a lot,” she says.

It would also appreciate donations of sanitary pads for its youth groups.