Residents in Komponi say they should be prioritised over informal settlement 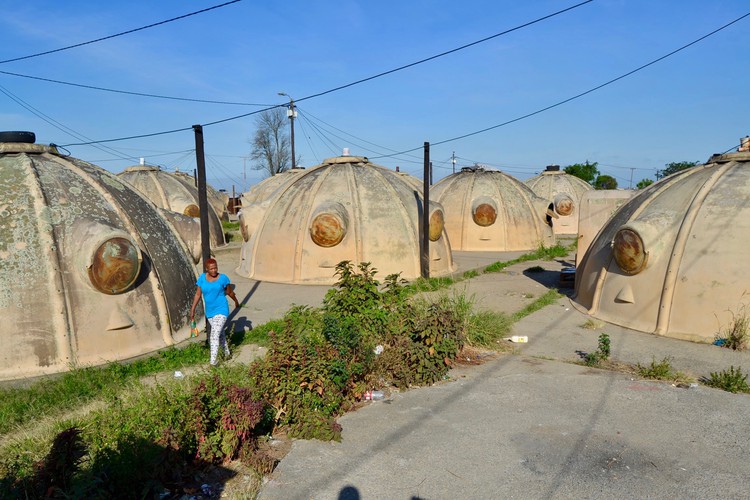 The fibreglass structures in which residents of Komponi live. Photo: Nombulelo Damba-Hendrick

Komponi and Emivundleni residents in Mdantsane NU1 have been waiting for two years for Buffalo City Metro Municipality to resolve a dispute over RDP houses.

In 2014, the municipality built RDP houses for Velwano informal settlement, which is also in NU1. However, Komponi and Emivundleni residents say they are the rightful owners as they have been waiting since 1990 for houses. They are demanding that at least 149 of the houses be allocated to them.

As a result of the dispute over who gets the houses, some RDP houses have not been occupied and have been left to vandals.

Komponi community leader Abongile Mejane says that in 1990 the Bantustan government of Oupa Gqozo identified land for houses to be built. He said they were given title deeds and a project to build two-room houses was started. The housing project was divided into two phases. One phase started from the north of Mdantsane, the other from the south.

When the first phase was finished, a group of housing beneficiaries were moved into their homes. Others were moved to fibreglass structures in Komponi, which had been used by former railway workers, to make space for more houses. Another group was moved to sites in Emivundleni.

Mejane showed GroundUp copies of the title deeds including his own.

Then in 1994, Mejane says, the housing project was stopped.

New houses started being built only in 2014, and without their knowledge, says Mejane.

Mejane says they staged protests, burnt tyres, and closed roads, but were only given empty promises by municipality officials.

“They acknowledged us as rightful beneficiaries of the land,” he says. “It’s been months that they are quiet. We are now watching our houses being vandalised, while we should be inside them.”

He says the houses they currently live in are in poor condition.

Community leader Nomsa Putuma says the fibreglass structure she lives in is unsafe. “When they catch fire, they totally burn. You cannot save anything. Several structures have burnt down and their owners had to build shacks.”

She also worries that the houses that have been vandalised will as a result no longer be habitable. She says the housing issue has created bad blood between Komponi, Emivundleni and Velwano residents.

She says the issue has been going on for a very long time and the “municipality does not seem to be taking it it seriously”.

Since 24 April, GroundUp has been attempting to get a response from the municipality and from the mayor’s office. Despite acknowledging receipt of the e-mails, the questions were not replied to. Follow-up calls were not answered and not returned.