Case on SAPS resources will be heard next week 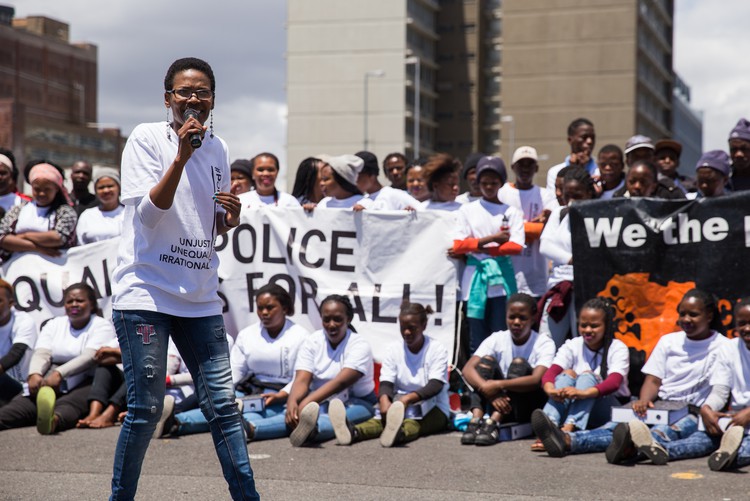 About a hundred people marched to Parliament on Wednesday to demand more equal policing.

Members of the Social Justice Coalition (SJC), Equal Education and the Nyanga Community Police Forum handed over letters addressed to the Members of the Parliamentary Portfolio Committee of Police. They also handed over nine black files of court papers to Irvin Kinnes, the content advisor of the portfolio committee.

One of the MPs who received a letter, Francois Beukman (ANC), said, “We welcome the visit today to the Parliament by civil society groups. We will have a special meeting in February looking at the issue of police resources to ensure that it is properly done. Next week in court we will follow all processes in relation to SAPS and resource management. We have engaged with SAPS on the budget process because we can’t have a situation where people in townships are given a second hand service.”

The demonstrators sang and danced, and wore white T-shirts which read: “We demand a fair allocation of police resources and quality police resources for all.” Placards read: “We the people demand open accountable governance … protect human rights.”

Dalli Weyers of SJC stacked cardboard boxes painted red and blue to demonstrate the disparities in crime and resources. Red boxes represented murders and blue represented resource allocation. He told GroundUp that white middle-class suburbs with limited violent crime are prioritised over predominantly black, poor, working-class communities with high levels of violent crime when it came to the allocation of police.

Mandisa Dyantyi, SJC Deputy General Secretary, told the protesters: “We have suburbs like Claremont and Bishopscourt that have lots of police resources, but areas like Kraaifontein and Nyanga, which have high murder cases, are under resourced. It is unjust that I get robbed in a taxi in Khayelitsha.”

Dyanti said that on 31 March 2016 the SJC, Equal Education and the Nyanga Community Police Forum filed papers in the Equality Court to compel the Minister of Police and the National Police Commissioner to revise the system governing the allocation of the police’s 194,605 personnel to the 1,144 police stations across the country. After numerous delays the matter will be heard from 28 to 30 November in Cape Town.