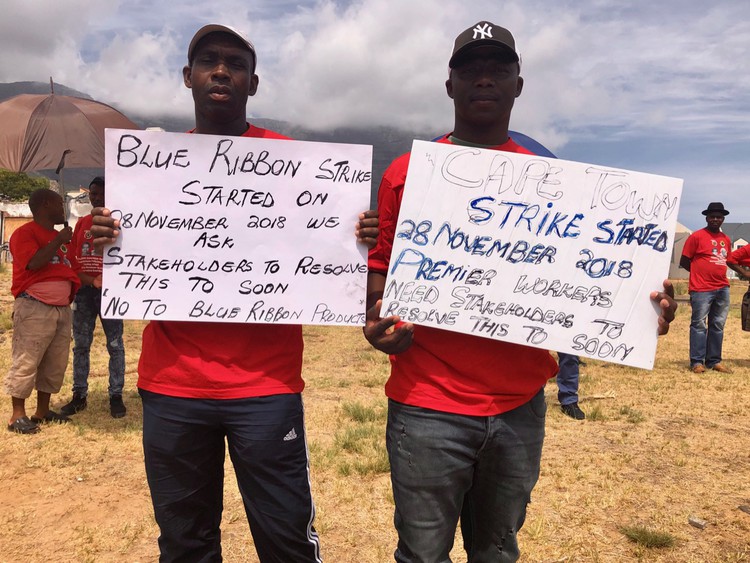 Premier Blue Ribbon Salt River employees have been on a protected strike since 28 November over wages and working conditions. Photo: Tariro Washinyira

Premier employees at Blue Ribbon bread in Salt River have been on a protected strike since 28 November over wages and working conditions. Their grievances include the withdrawal of a paid lunch hour and reducing Sunday rates from double pay to one and half times normal rate.

The employees, who are represented by The Food and Allied Workers Union (FAWU), say they will continue with the strike.

“We will continue fighting. We don’t want to give away the right our forefathers fought for…. Apartheid is over,” said a 25-year-old worker from the dispatch department. He did not want his name known.

“Our bosses are arrogant. They call us the “K” word because we refused unpaid lunch break. They then called police that injured some protestors and union personnel when we protested in November,” he said.

Premier Group Strategy and Marketing Executive Siobhan O’Sullivan said the strike has been marked by violence and intimidation of employees, traders and consumers.

O’Sullivan said management will be meeting FAWU at the CCMA on 4 March. Premier has offered a three-year, 8% wage increase, which is above inflation.

She said the company had no evidence to support the accusation that the “K” word had been used by management.

Regarding the other grievances of the workers, O’Sullivan said the changes were to align the Salt River operations with the rest of Premier’s businesses and they were all in line with the Basic Conditions of Employment Act.

Workers told GroundUp they are struggling after having not been paid for three months. A worker said he can’t look for alternative work until the union finalises the negotiations with the employer.

A striker said his 16-year-old child was not in school because he cannot afford to buy the necessary stationery. He also can’t pay fees for the creche for his youngest child. But he said, “We can’t go back and work under the same conditions.”

FAWU General Secretary Katishi Masemola has threatened a national solidarity strike at all Premier bakeries and milling operations. “They are ready and just waiting for us to announce the date,” he said.

Masemola said the workers had initially demanded 9%, and would accept 8% but only as a one-year contract agreement not for three years.

“Yes, the comrades are struggling to pay for rent and buy food, but it is not decided by us [union leaders]. It is decided by them [the workers],” said Masemola.