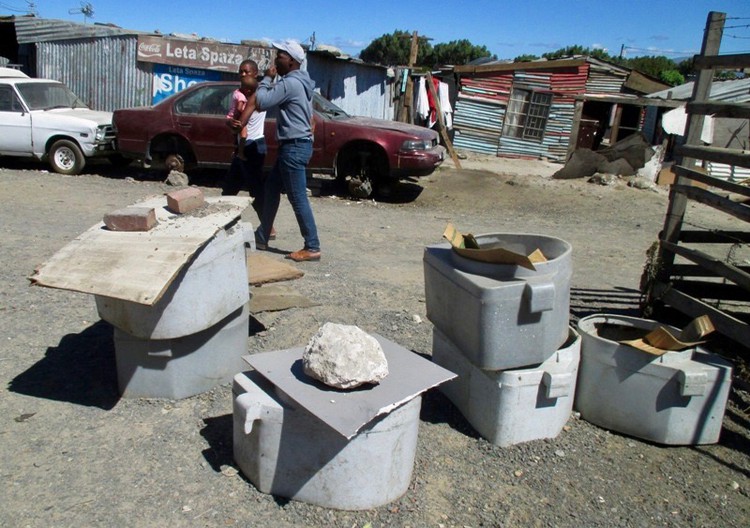 Some residents moved their bucket toilets away from their homes and left them on the dusty streets, covered with cardboards and plastic to help contain the smell. Photo: Mandla Mnyakama

The toilets are supplied by the City of Cape Town to homes in the area and surrounding settlements and janitors are employed to clean them.

Last week, residents in one section of the settlement forced janitors to stop work just after the janitors had removed the portable toilets, which were full.

Residents say that they told local ward councillor Bongani Ngcombolo that they wanted 21 people who had worked as casuals in the area since December to get the janitorial positions from 1 February.

They say Ngcombolo chose to employ new janitors from the municipality’s database instead and sidelined the casuals. The casual workers had waited at the communal hall in Barcelona, but Ngcombolo had conducted the hiring process in the Gugulethu municipal offices.

Now residents have vowed to prevent toilet cleaning services in the area until Ngcombolo and the municipality have complied with their demands.

Mongameli Mbili, a local street committee chairperson, said the community wanted Mayor Patricia de Lille to intervene because the recruitment process was not transparent. He said promises made to the casual workers had not been kept.

However, other residents were concerned about health hazards related to the unemptied toilets. Resident Nokuzola Ndlovu, 56, said no one had informed her of what was happening since Saturday morning when she had found the buckets near her home.

“It is worse now that we have been left with no place to relieve ourselves after the removal of the buckets from our toilet structures,” said Ndlovu. She wants flush toilets to be installed to prevent a similar problem arising in the future.

Thoko Mahlanza, 26, said some toilets had been left in front of her shack. She has a seven-year-old child. “The smell becomes awful because of the heat. We are forced to stay behind closed doors. I always fear for my child. Its also difficult to cook or eat in this kind of situation. I do not know if maggots might crawl into our home if the wide open buckets [toilets] are still ignored like this.”

Councillor and Mayco member Siyabulela Mamkeli said a meeting was scheduled with Ngcombolo and city officials, who would then meet with the Barcelona community leadership.

“The City has chosen to randomise the allocation of job opportunities to prevent bias in the selection of candidates.

“In the interest of fairness and consistency, we cannot deviate from the policy in this case.”

“Those who disrupt the service are holding the rest of the community to ransom for their own demands, and this should not be condoned,” said Mamkeli.